I love it when we get independent benchmarks comparing Pantheon’s website management platform to hosting providers, because inevitably, we crush our would-be competition. We’ve put years of effort into optimizing our platform for performance and scalability, so it’s great to see all that hard work paying off.

The latest outfit to stress test Pantheon is ReviewSignal. They took 16 different providers who claim to have an optimized runtime for WordPress and tried pushing them up to 2,000 concurrent logged-in users with LoadStorm’s cloud-based load testing tools.Pantheon came out on top: we had the fastest average response time with zero errors under the heaviest load.

Learn how you can improve WordPress hosting performance with Pantheon.

As you read further, keep in mind that ReviewSignal used LoadStorm to test with logged-in users:

Logged in users were designed to break some of the caching and better simulate real user load which a lot of people (both readers and hosting companies) requested after the first round of testing.

Dynamic pageviews are what makes sense to stress, because otherwise all you’re testing is whether caching works or not. Obviously you need your caching to come correct—more on that later—but it doesn’t say much about a provider’s actual runtime engine.

Here are the results of the first test, which only ramped to a thousand users: 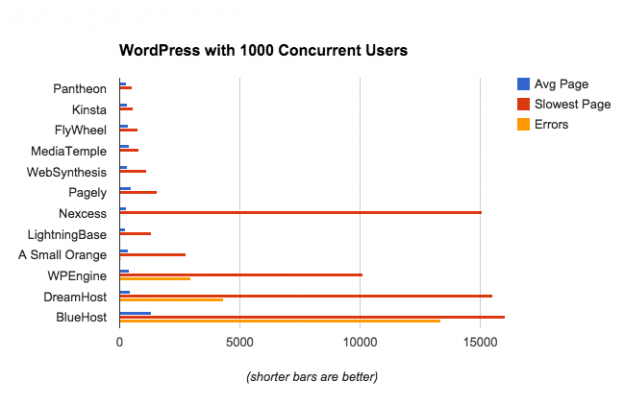 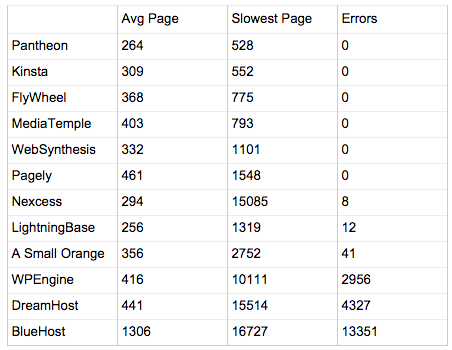 As you can see, WPEngine, DreamHost, and BlueHost simply tipped over. They had some unacceptably long load times (10 seconds+) and delivered a large number of error responses, likely because they were completely swamped. These providers were not included in the next round, which ramped all the way to 2,000  concurrent users, which managed to tip over a few more: 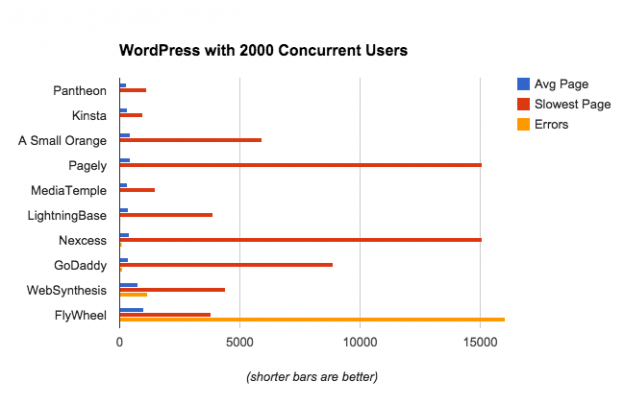 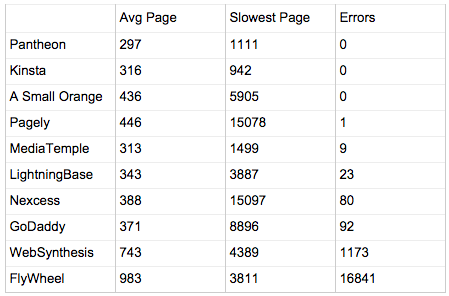 What These Numbers Mean

While these tests were done with logged-in users and properly tested dynamic page generation, the dummy site being tested was a simple one with a small amount of lorem ipsum content. You shouldn’t assume that a real site will necessarily perform at this level. These are benchmarks only.

And of course there’s nothing wrong with caching. It’s is a necessary part of any well-designed system, and every software tool you use is full of them: from the cache in your browser, down to the L2 memory buffer on the CPU of the server delivering the page response. As Poul Henning Kamp (the author of Varnish) says, “it’s caches all the way down.”

It’s good that ReviewSignal’s tests were designed to blow past full-page caching. However, because they used a test site with a small amount of content and hit the same urls repeatedly, performance here was no doubt assisted by some of the many other caches “down there” in the stack (e.g. the mysql query cache). A real-world use case hitting lots of different urls against a larger and more complex catalog of content would certainly not show the same level of performance.

With that in mind, it’s important to know that Pantheon has the ability to go a whole lot further. We run sites with very large data sets and traffic peaks in the hundreds of dynamic pageviews a second. Unlike any of the other providers tested, our platform makes WordPress horizontally scalable.

This means that the load for a site can be spread across many instances, and it’s an architectural requirement to be considered truly web-scale or highly available. Every other provider tested puts WordPress on a single instance by default, and only offers horizontal scalability (if at all) as a special service.

Pantheon makes every single site horizontally scalable from the moment it's spun up. That way, when you hit the limit of what one instance can do, it’s easy to add more without any unexpected side-effects. You don't have to re-platform. This is what we call “smooth scaling”, and it's an important part of how we offer a consistent, dependable, reliable platform.

Smooth scaling stands in contrast to the status quo, which is providers using different architecture for different classes of service—inevitably leading to unexpected consequences when scaling, which is when you need them least—or who can only scale “vertically” by up-sizing a virtual machine or VPS. Vertical scaling can work, but you're still limited to what a single machine can provide, and every level-up requires downtime for a reboot.

These are the problems that stress out every infrastructure manager and site developer leading up to a big campaign or launch. With Pantheon they’re just solved. Your site is running on one big platform (not a single instance) which does billions of pageviews a month. You won't tip us over. You can stop being afraid of success.

The other thing to keep in mind is that Pantheon is the only one of these providers that's actually a complete website management platform. Here are things that make us unique compared to every other provider:

Simply put, there’s nothing else out there like Pantheon for WordPress. We give you and your team what you need to take on bigger and more ambitious projects and win. It’s not just unbeatable performance and unlimited scale, but also by going above and beyond hosting with a management toolset build by developers, for developers.

As more and more agencies and clients use WordPress in more high profile, mission critical, and high-traffic situations, we’ll be there to provide all the tooling around the website, making sure the dev process is smooth, the launch is perfect. There should never be any doubts about whether the site can handle the hits.