Social distancing is changing our expectations of the Open Web, forcing us to push the boundaries of what it can do and who it can serve. It's imperative we leverage this digital transformation to create permanent, positive change.

This post is in response to an article from Monty Mullig, President of digital agency IfThen, on how 9/11 led to the rapid adaptation of internet news sites, and the potential for COVID-19 to fuel similar transformation.

We are living through digital transformation, as the reverberations of social distancing rapidly accelerate what the internet can do, indeed must do, to meet the moment. We are all reimagining what's possible in our everyday lives, and the ways the Open Web can change how work, live, learn, and consume. In many instances, things will not return to what they were previously.

This is similar to the way 9/11 changed the public's expectation of the web and its capacity for delivering real-time information. As Monty Mullig—now a principle at If/Then, but at the time part of the internal tech team at Turner Broadcasting (CNN's parent company)—wrote recently:

Outlier events force rapid adaptations, both by individual sites and businesses and by the internet as a whole. In the early days of the internet, it was flash crowds—of which 9/11 was the most extreme example—that drove innovation in scaling. And from the beginning of the internet, going back to the Morris worm in 1988 and continuing today, large scale security breaches and DOS attacks have forced rapid innovation and adaptations on businesses.

The rapid wall of traffic during 9/11 taught the team at CNN.com the true peak of site traffic—double what they'd previously estimated and 20x the daily average—and forced Monty's team to adopt new capabilities in record time, leading to permanent and sustainable change in their operations. The same thing is happening today.

Read more from Josh on how our new focus on local highlights challenges for the Open Web.

The Pace of Today's Transformation

As Pantheon CEO Zack Rosen explained during his Keynote at our recent WebOps Summit, the pace of digital adoption we’re currently seeing is by some measures 65x the historical baseline. So if it feels like the world is changing almost overnight, it is. We’re experiencing a years worth of change (or more) every single week:

While a global pandemic was impossible to predict, this phenomenon of digital transformation has long been anticipated. Analysts have been observing a slow-building trend over the past decade, as well as the gap emerging between those companies and institutions who adopt and adapt with new technologies, and those who do not. There’s now a forcing function putting this on fast-forward.

"The crisis mostly accelerated changes that have been in motion for many years. The tools that were needed already existed as well as the vehicle for conducting business, the Internet," Michael Fauscette, chief research officer at peer-to-peer review site G2, recently wrote for his site, The Faceless Economy. "[Next comes] optimizing the new processes, tools and business models to work correctly."

In a recent G2 Research survey of 676 businesses, 44% of respondents had purchased three or more new software tools to meet remote-work requirements, for example. And 76% of respondents expected some or all of the adopted technologies would remain in place permanently.

"The rapid adoption of digital business practices has radically changed the way many businesses work," Michael writes. "In a post-pandemic world it is unlikely that the now digitally transformed businesses will revert back."

These operational changes—being able to Zoom into calls remotely, or Slack colleagues for instant answers—are only half the equation. As we adopt new technologies, we're creating different experiences in our everyday lives, which reach beyond the digital realm. This will permanently change our expectations of the Open Web, across all industries. 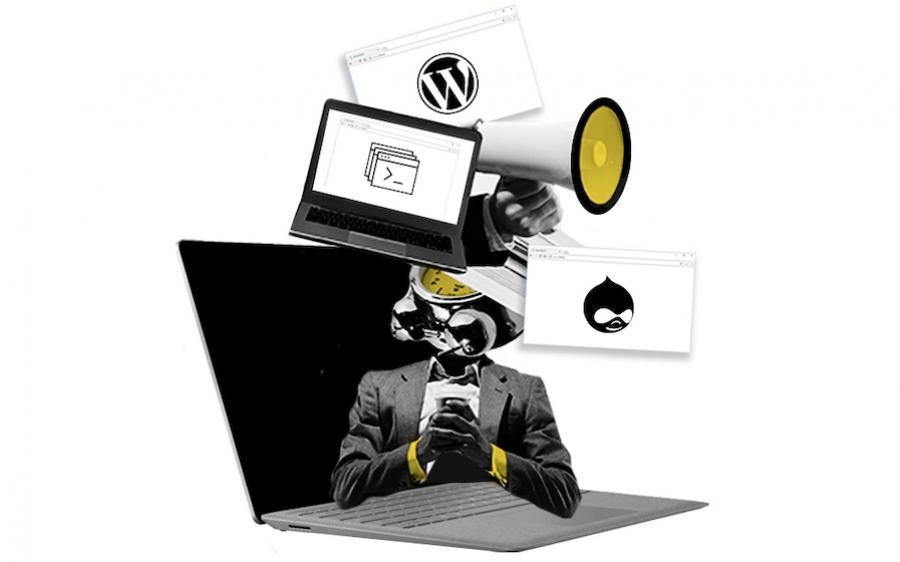 In the past five weeks, for example, Pantheon helped four universities in the US do something that's never been done before — host virtual commencement ceremonies. The web teams at Harvard, Cornell, NYU Stern, and the University of Southern California had no idea how many unique visitors to expect on "virtual graduation" day, or how their sites would hold up against such an onslaught.

Now it's been done, it will most certainly happen again. The discovery that it's possible to invite family members to participate in commencement ceremonies without traveling, from wherever they are in the world, is too compelling to ever let go. This is an entirely new way for these institutions to use the Open Web, created extremely quickly because of  current upheaval, that will now be “business as usual” going forward.

The Open Web Cannot Be Left Behind

Historically, the Open Web has seen less institutional investment than SaaS products and social platforms. Device manufacturers have trillions of dollars of cumulative R&D. Telecommunication companies invest tonnes of capital in infrastructure and networks and connectivity. And app makers are very, very focused on continually building a better user experience.

By contrast, there are a lot of companies that leverage the Open Web, but they're not necessarily making those structural advancements or investing in core infrastructure. Open source is huge, but it’s also largely driven by volunteers. If the Open Web is to deliver results as a first class platform, this has to change.

The demand for first class experiences is clearly there. We’ve cited a lot of external sources showing how digital interactions and engagements are rising in importance. Our own first-party data shows more than 17% of our enterprise clients saw a 20% increase in site traffic in March, compared to the three months prior (the jump was greater than 50% for 7.3% of enterprise clients).

This rapid increase in internet usage makes clear the need to invest in the Open Web. We must push the boundaries of what it can do, and lean into this period of transformation to enrich our digital and everyday experiences. As more companies see returns on these investments, there’s a compounding flywheel effect that we believe will not only lead to success for those companies, but also improvements to the Open Web as a whole.

Join Monty Mullig, President at digital agency IfThen, Abe Brewster, CTO at local news network Patch.com, and Josh Koenig, Co-Founder and Head of Product at Pantheon,  as they reimagine what's possible during this period of digital transformation. Register for the webinar today.