This year I have had the amazing opportunity to go to a number of Drupal centered events, from NERDSummit, to MidCamp, to Stanford WebCamp (formerly DrupalCamp). And of course DrupalCon Seattle! There was a single, large conversation that emerged at every single event and also in general conversations with my Drupal community: “Should I migrate to Drupal 8?”

I think since the release of Drupal 8.7, the real question should actually be: “Why wouldn’t I go to Drupal 8?” Though, to be fair, I completely recognize there are justifiable reasons for staying on an older Drupal version. If your own investigation has not pointed you toward Drupal 8, we are still here for you and would love to support your Drupal 7 or even Drupal 6 sites. But if you are still on an older version because of simple inertia or because “that’s just the way we have been doing it for years now,” then read on to see what all the excitement is about.

“Why Drupal 8?” is a complex question and I would never suggest a single blog post could encompass all the amazing reasons. There are a lot of other resources that mention the merits of things like the mobile first approach out of the box and built-in configuration management. Instead, I am going to focus in on six big reasons. Five of these are reasons I have heard repeatedly in conversations and one that is dear to my heart.

Going between my Drupal 7 and Drupal 8 installs is a jarring experience. The smoother layout of Drupal 8 just feels more intuitive to me and is closer to what I am expecting in an admin experience. It is not just the new shiny buttons I am talking about, but the whole of the layout.

For example, when managing roles, I need to click into the Permissions tab before I am exposed to the submenu for creating a role. Not the most intuitive experience. Drupal 8 presents me with the Roles tab as soon as I click into the People section. Much less hunting to find the same functionality. And that is just one example, the admin experience is just way more intuitive. 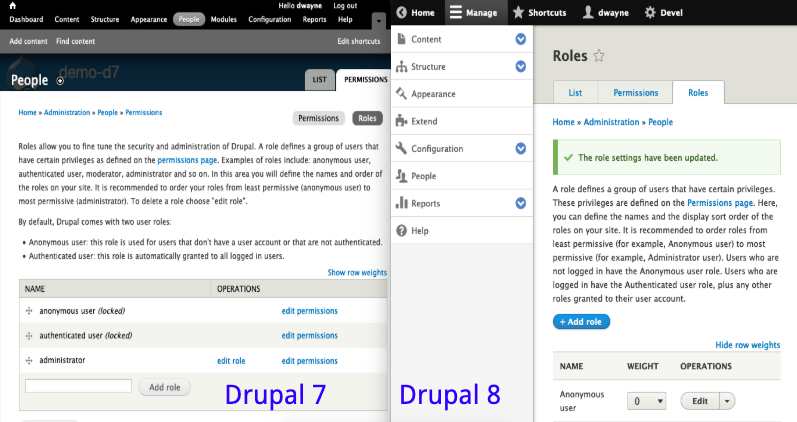 Speaking of better user experiences, the feature that rolled out with Drupal 8.7 that I have enjoyed exploring the most is the newly included in core Layout Builder. If you want your content editors and site builders to easily make more beautiful and useful pages, this should be reason enough to embrace Drupal 8. Want three columns instead of one on your template? That is pretty easy now. Want to add a new section for custom content types on a single page or article? Just click the Layout tab and get going!

One of my favorite example use cases was presented by Dries, the founder of Drupal, back at DrupalCon. Watch it below and I think you might just have the same reaction I did (which was “wow!”).

My favorite quick summary of what this allows you to do is actually the comparison to core’s REST module. For a great read on how to think about and use the JSON:API, I recommend this article from Pantheon partner Hook42 which includes some pretty awesome examples and a link to their Cat Facts API Module.

This one should need no introduction or much explanation to anyone who has ever struggled with configuration management between environments. The built-in Configuration Management Interface, or CMI, can save a DevOps team a lot of headaches. The integration with Drush, in particular, means you can automate configuration management in your workflows in a lot of time and trouble saving ways, like with our Quicksilver scripts.

This is personally my favorite feature of Drupal 8 and I had to mention it here. In fact, I recently wrote a whole post on how to use Tour module. I see a lot of use cases where developers can explain exactly how to use their sites to any end user, all by just filling in a few fields.

Imagine sitting down with a user and finding a common language that your organization’s users will best understand. Then instead of just writing a doc you hope someone will find and read, you empower every new user with a walkthrough using that same language available every single time they load that view in Drupal! This has been in core since 8.0 and is already enabled and waiting for you. No coding required!

Ready for the Future of Drupal 9 and beyond!

Last on my list, but certainly not least in terms of things to consider, is that the upgrade path from Drupal 8 to Drupal 9 and beyond will be as simple as upgrading minor versions is now. We have now seen the Drupal community successfully hit every stated goal on the roadmap and I can’t see any reason why they will not hit the release date of June 2020 for Drupal 9.

Perhaps a more important date is the EOL for Drupal 7, November 2021. For those folks wanting to future-proof their web projects, moving to Drupal 8 will make this migration/rebuild the last needed to keep on the latest version of Drupal well into the future.

Speaking of Drupal 9 readiness, did you know that almost half of all contrib modules are D9 ready? For the rest, it does not seem like there are going to be nearly as many challenges as there were going from Drupal 7 to Drupal 8. The future of the project is looking pretty bright from my perspective.

If you are ready to take Drupal 8 for a test drive, or if you are ready to migrate your site right now, you can spin up a new site on Pantheon for free! Since it is recommended to use Composer to manage your Drupal 8 site, this would also be a great time to check out Build Tools and the modern workflow it brings. We can even help point you in the right direction on how to get started with the CMS itself.

Hopefully, this will help you get excited about Drupal 8 as I am. Let us know your favorite parts about Drupal 8 in the comments below. Always feel free to drop by our Office Hours, or our Community Forum, if you ever want to talk about Drupal 8 and Pantheon. 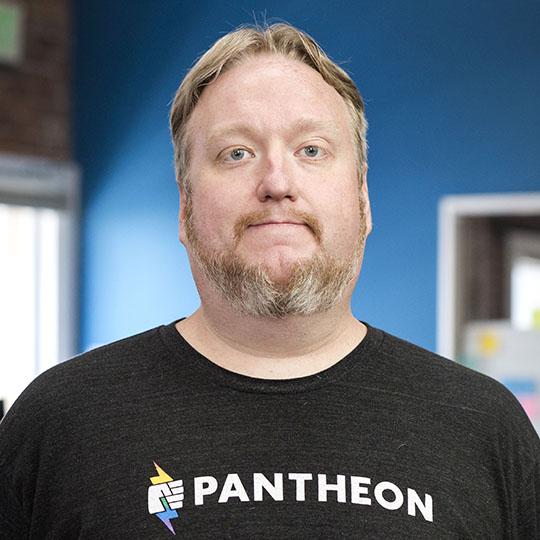