The information in this blog post has been superseded by:

[DOC] Drupal 8 and Composer on Pantheon Without Continuous Integration

Composer is the de-facto dependency manager for PHP; it is therefore no surprise that it is becoming more common for Drupal modules to use Composer to include the external libraries it needs to function. This trend has rather strong implications for site builders, as once a site uses at least one module that uses Composer, then it becomes necessary to also use Composer to manage your site.

To make managing sites with Composer easier, Pantheon now supports relocated document roots. This feature allows you to move your Drupal root to a subdirectory named web, rather than serving it from the repository root. To relocate the document root, create a pantheon.yml file at the root of your repository. It should contain the following:

With the web_docroot directive set to true, your web document will be served from the web subdirectory. Using this configuration, you will be able to use the preferred Drupal 8 project layout for Composer-managed sites established by the project drupal-composer/drupal-project. Pantheon requires a couple of changes to this project, though, so you will need to use the modified fork for Pantheon-hosted sites.

Pantheon has created an example repository derived from drupal-composer/drupal-project for use on Pantheon with a relocated document root. The URL of this project is:

There are two options for installing this repository: you may create a custom upstream, or you may manually push the code up to your Pantheon site.

Installing with a Custom Upstream

The best way to make use of this repository is to make a custom upstream for it, and create your Drupal sites from your upstream. The example-drops-8-composer project contains a couple of Quicksilver “deploy product” scripts that will automatically run composer install and composer drupal-scaffold each time you create a site. When you first visit your site dashboard after creating the site, you will see that the files created by Composer—the contents of the web and vendor directories—are ready to be committed to the repository. Pantheon requires that code be committed to the repository in order to be deployed to the test and live environments.

We’ll cover the workings of the Quicksilver scripts in a future blog post. In the meantime, you may either use the example-drops-8-composer project directly, or fork it and add customizations, if you are planning on creating several sites that share a common initial state.

Installing by Manually Pushing Up Code

If you don’t want to create an upstream yet, or if you are not a Pantheon partner agency, you can use the following Git instructions instead. Start off by creating a new Drupal 8 site; then, before installing Drupal, set your site to Git mode and do the following from your local machine:

The “deploy product” Quicksilver scripts run during site create, so you will need to run composer install and composer drupal-scaffold yourself after you clone your site. Then, use the commands below to push your code up to the site you just created:

Replace my-site with the name that you gave your Pantheon site, and replace ssh://ID@ID.drush.in:2222/~/repository.git with the URL from the middle of the SSH clone URL from the Connection Info popup dialog on your dashboard. 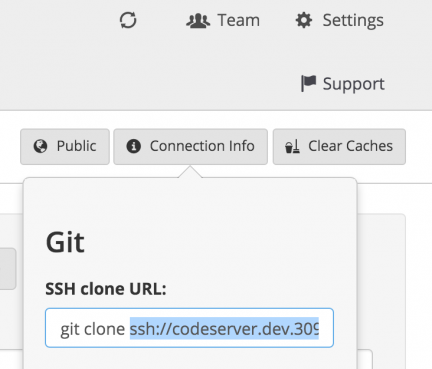 Copy everything from the ssh:// through the part ending in repository.git, removing the text that comes before and after. When you run git push --force origin master, you will completely replace all of the commits in your site with the contents of the repository you just created.

Once your site has been installed from this repository, you will no longer use the Pantheon dashboard to update your Drupal version. Instead, you will manage your updates using Composer. Updates can be applied either directly on Pantheon, by using Terminus, or on your local machine.

Once you have the plugin installed, you will be able to run composer commands directly on your Pantheon site:

Be sure that your site is in SFTP mode first, of course. Note that it is also possible to run other composer commands using the Terminus Composer plugin. For example, you could use terminus composer my_site.dev require drupal/modulename to install new modules directly on Pantheon.

Updating on Your Local Machine

If you have already cloned your site to your local machine, you may also run Composer commands directly on your site’s local working copy, and then commit and push your files up as usual.