Just like web developers don’t need to write their own CMS from scratch thanks to Drupal, we see a world where they don’t have worry about servers. Period. The infrastructure problem can, should, and will be solved.

This isn’t a new idea. The industry has been making progress along these lines for the better part of two decades. It used to take a huge development team and a seven-figure budget to put even a moderately interesting website online. Since LAMP and Drupal came on the scene, that’s no longer the case. We see the future as a further evolution along that path: 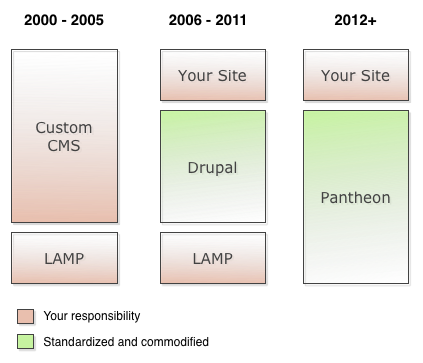 The big problem with where we've been for the past five years is that developers have had to cover two very different (and rapidly evolving) sets of problems. They have to keep up with the whole web, but infrastructure is still their responsibility. They're stuck in the middle of the stack with their focus split in two places.

The web has gone through major shifts, from editing HTML server-side to the “Web 2.0” era and beyond. We’re in the midst of another revolution, one in which it’s not only assumed that you have a CMS, but that you can develop, launch and scale as many sites as you want, in minutes if needed.

That’s what we do. We lift you out of the trenches of procurement, provisioning, configuration and ongoing maintenance. We provide Drupal as a utility service. We eliminate the common mundane problems and free you up to do what only you can do: build, launch and run an amazing website that does wonderful things in the world.