This summer, I had the pleasure of helping Mr. Money Mustache migrate, optimize and performance test their site. Any fans of Mr. Money Mustache probably remember the days of slow page loads and timeouts when trying to navigate the site for their financial freedom advice fix. With the combined powers of Pantheon, Valet and Mr. Money Mustache we were able to turbocharge performance and provide vastly improved site stability.

Curious how? Read on, dear friends.

Migrations and Builds: The Pantheon Way

Pantheon’s infrastructure is known for high performance and excellent developer tools. We also have a pretty great support team here with a smaller dedicated team managing the onboarding process, wherein we work with contract clients to onboard developers and review site configurations and performance. Essentially, clients have a short-term dedicated support rep to make sure the migration or build is smooth, dev tools are accessible, platform considerations are known, best configurations are in place and that the site is performant at scale. Site launches should be a time of celebration and success, not stress and teeth-gnashing.

Why Bother with Site Onboarding?

Sites are like houses: lots of effort for the initial construction, considerations for the environment underneath and ongoing maintenance that is sometimes ignored (resulting in detrimental impact over time). As an Enterprise Onboarding Manager at Pantheon, I see lots of common issues with migrations that we address during onboarding:

When Mr. Money Mustache attempted the initial import to try out Pantheon and move away from their virtual machine setup, there were a few immediate issues that needed attention:

Once the import was up and running, we found a few pages were crashing consistently from a yet-to-be-identified cause. Discovering the root cause and implementing a fix meant digging into the code, and we knew just who to ask: our talented friends and beloved partners at Valet.

After a few hours of discovery they found two main issues resulting in page crashes:

Learn more about the work Valet did on the Mr. Money Mustache site in this screencast.

Now that functionality was in place we were ready to take it for a test drive on Pantheon. The result? Vastly improved page load times, especially as the edge cache started to warm up and no crashing as the number of concurrent users ramped up.

Soon after, Mr. Money Mustache made the blog cutover and not a moment too soon; the legacy hosting service was down again! While the forums still remain on legacy hosting at the time this went to press, the blog is humming along over here at Pantheon. 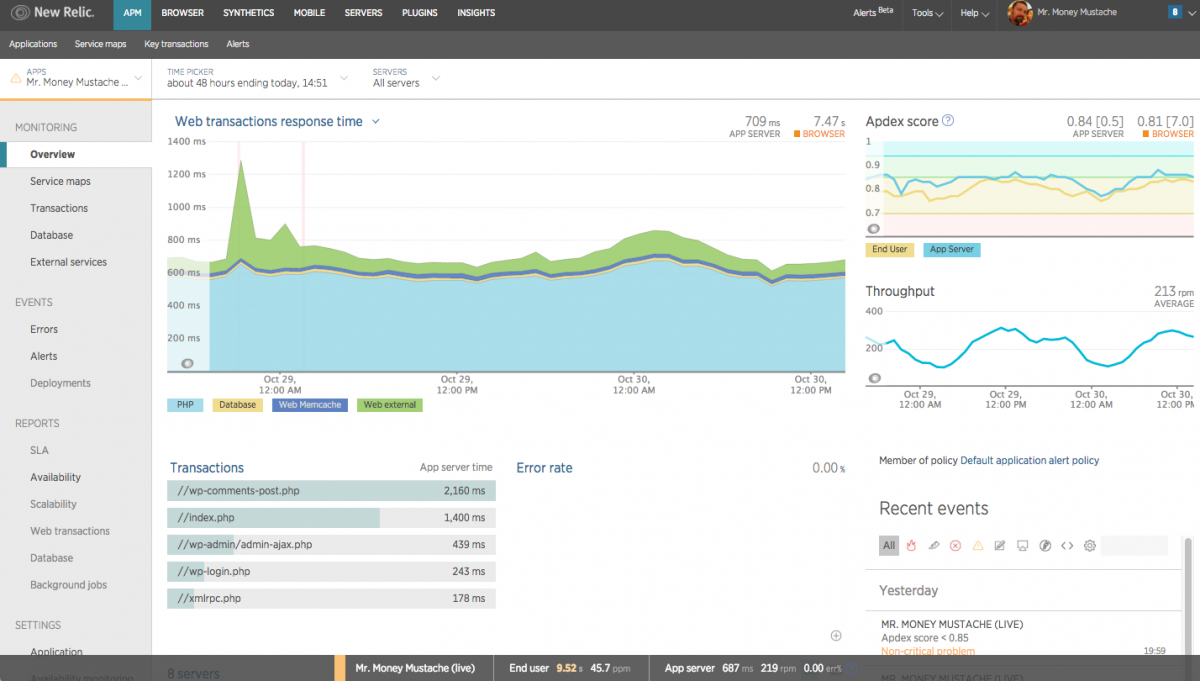 Happily Ever After on Pantheon

Websites are not static entities so web developers and site owners should always keep long-term maintenance in mind, not just the initial build. Annual or, even better, quarterly site reviews are essential in keeping your site happy and healthy over the long haul. Combine this with testing performance for each functional iteration and you’re well on your way to best practices and continuous integration. For the Mr. Money Mustache main blog we were able to discover issues, implement solutions and make sure functionality would scale. The end result? Happy Mustachians, a stable site and cheers all around.

Want to learn more about Mr. Money Mustache? Read the case study & the story from MMM himself.