University websites must balance many competing priorities. The web presence needs to encourage undergrad enrollment, direct current students to needed resources, inform people visiting the physical campus, and much more. A small college web team can feel like they are torn in different directions when they know they need to increase conversions while often struggling just to keep on-premise hardware up and running.

Organizing competing priorities gets easier when viewing them as building on one another. Maslow's hierarchy of needs is a helpful metaphor for seeing how a university can leverage a stable foundation to achieve goals now and in the future.

I've written previously on applying the hierarchy of needs to DevOps and performance specifically. Here, I'll take on the whole web presence and emphasize ways higher ed web teams can rely on automation and standardization at one level of the hierarchy in order to move their focus to a higher level. 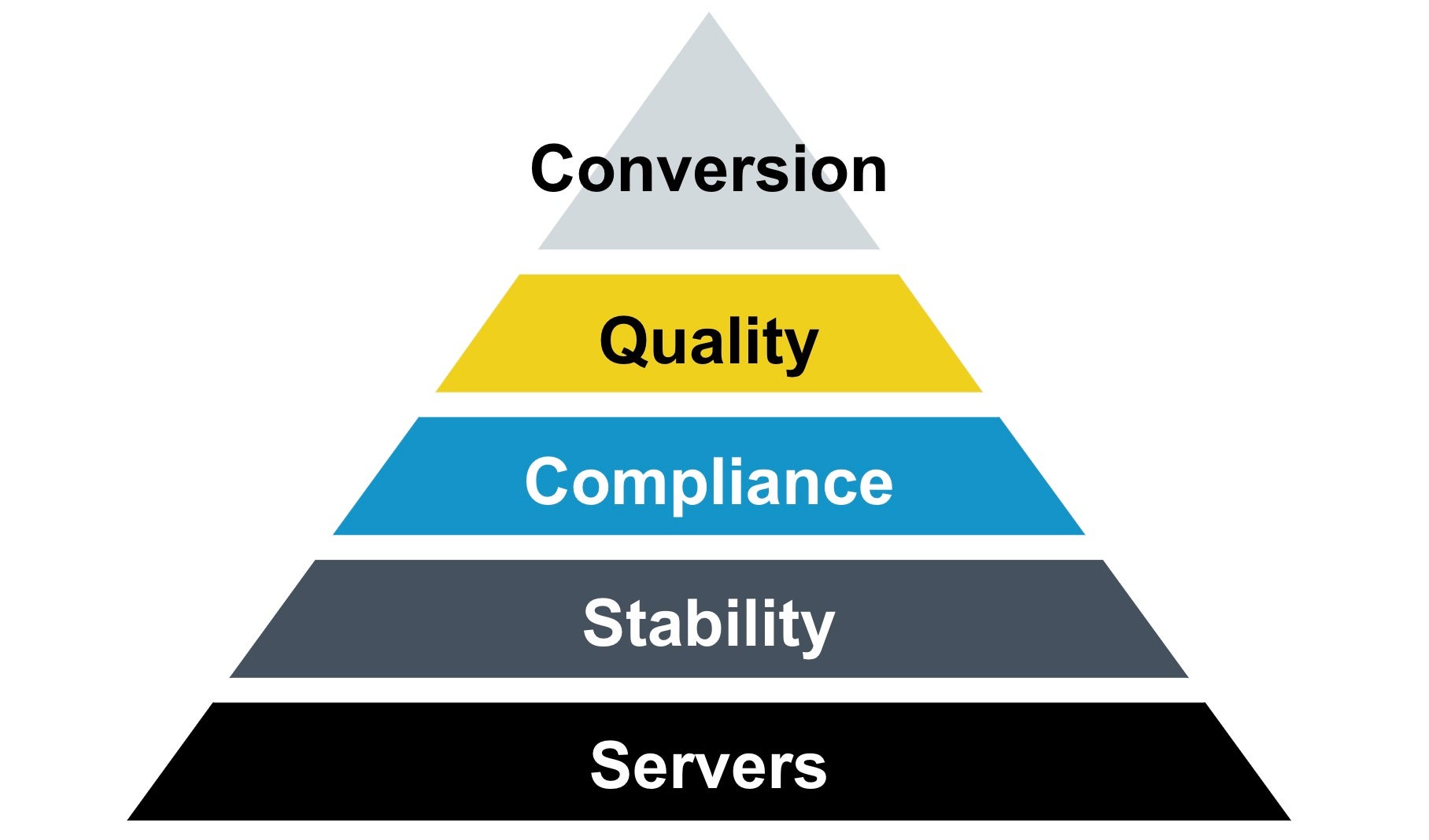 People need food, air, and water. Websites need the functioning server environments. I recently heard an anecdote about a major university's first website which ran on hardware on top of someone's desk on campus. When someone visited the website, it rang a physical bell in the office.

The 90s were a different time. One person could have the authority to do what they wanted with the website for the entire university because the entire website was on their desk. But If that building lost power or the powerstrip under that desk got unplugged, the website was down. That feels like too much responsibility.

The basic promise of the cloud is a more appealing balance of authority and responsibility. With most major cloud providers you have the authority to set up servers, virtual machines, or containers in nearly any way you want. Maximum authority with minimum responsibility to keep the power running and the air temperature cool.

By moving off premise and in to the cloud you can lock down the bottom layer of the hierarchy of needs for websites and continue reaching for the top.

The cloud is a big place. Taking 100 Drupal or WordPress sites running on campus and throwing them on to 100 different and unconnected cloud locations might not be much of an improvement if your team is unfamiliar with the cloud provider or there is no workflow tailored your CMS.

Companies like Pantheon build on top of the big cloud providers to deliver environments tuned specifically for Drupal and WordPress. We recently migrated from Rackspace to Google Cloud without anyone noticing because the way developers used Pantheon remained the same. We continued providing the same stable workflow that allows teams to test and deploy security updates quickly through multiple environments.

By picking a platform like Pantheon, university web teams can spend less time focused on the infrastructure and workflows that deliver the CMS and more time focused on what is being delivered.

Plenty of web teams want to celebrate when they get all of their sites off premise and on to a platform built to run the CMS they use. They feel ready to drive those top level success metrics such as undergrad applications, donations, or athletic ticket sales.

Yet the celebratory email does not get the expected responses.

The web team has hit a human compiler error. Just like PHP won't do anything for you until you fix a type error, there are likely people in the university whose job it is to fixate on errors and ensure compliance.

Drupal and WordPress can help. Making a good parent theme that individual department sites can extend is a great way to increase brand consistency. There are modules and related tools that help check accessibility concerns.

In addition to complying with your institution's expectations around branding, you will need to stay in line with governance and access norms. Who is allowed to edit which sites and pages? A helpful shorthand is to think about access to physical spaces. At a small college there might be only two people handling nearly all web content. One tends focus on the pages for the academic departments and the other handles athletics, alumni, and everything else. Their desks are back to back and they cover for each other during vacations. There is no need for lockdown content section by section.

At a large university expectations are different. Schools operate out of separate buildings with separate staffs. The administrators would be unsettled if they found they could change content on each others pages. In those cases you can use a variety of modules and plugins—or entirely separate sites with Pantheon's Custom Upstream offering—to ensure people can edit only what they are supposed to.

Before the web team can make time for asking if their sites are good, they need to make sure the sites are not wrong.

University web teams have to wrangle a lot of content. They need high quality images, prose that is engaging and easy to scan, and taxonomy terms that will surface the right articles in the right places. A long history of editorial processes across different media shows that quality goes up when authoring and editing happen separately and with different people. One person writes a draft and another edits it.

Drupal and WordPress have a number of options for enforcing editorial workflow steps. In my previous job I maintained parts of the Workbench suite, a popular choice in Drupal 7. Now in Drupal 8, the Content Moderation and Workspaces modules have gone into core as experimental modules. WordPress has many plugins for customized workflows. Edit Flow is a popular choice.

With content editors reviewing content and developers reviewing each others commits through a pull request process or something like it, then everyone contributing to the website has a chance to confirm that the changes being made build toward increased conversions.

Measuring and growing the conversions generated by your site often means using tools beyond the the site itself. Unfortunately, many teams add a tracking code and never check their stats. They need to spend their energy on lower levels on the hierarchy.

Even if you do have every lower level of the hierarchy under control and have time to engage deeply in your traffic stats, it is critical to know what you are looking for. Google Analytics and similar tools can offer an overwhelming amount of information. Consider using something like Google Data Studio to build a custom, shareable dashboard that will highlight the numbers you have decided to care about most.

Growing conversion numbers can often be done with slow, deliberate work reinforcing the quality of your site. But sometimes you need more arbitrary experiments. Can an editor really know which photo is likely to generate the most clicks? A/B testing is a way to swap out different content or behaviors on a site and measure the results. Used in moderation, it can be a valuable tool to inform how a team drives traffic.

Each layer of the hierarchy could eat up all of the available time a web team has if they tried to do all of the work of that layer on their own. In practice, teams can drastically cut the effort spent in a layer by relying on standardized outside tools. By getting off of on-premise hosting and using a cloud solution made for Drupal and WordPress, university web teams can dedicate more of their time to the layers that their stakeholders see and care about most.