Earlier this year, CERN brought back the "original website", 20 years after it was first launched. Two decades in, it's amazing how much has changed and how much has stayed the same.

20 years ago, websites were just raw HTML documents served by simple HTTP daemons. Publishing meant editing those documents directly via a shell, or copying files edited locally up to the server. Today, the assumption is that all sites are software, that there's some kind of CMS behind every destination on the web, and probably a workflow for development and deployment.

On the other hand, there's FTP. One of the original means to "copy files up", it remains in use even as what's being copied has changed from the content itself (raw HTML) to the code for the software behind it. These days everyone uses its secure cousin (SFTP) but the song remains the same: even in an era where version control is considered best-practice, this stolid warhorse of the web doesn't appear to be going anywhere.

As part of our Multidev launch we're bringing the best of the old and the new together. Now you don't have to make a choice between the tools you know — developing online via FTP — and the tools you want (version control, feature branching, CI and automated deployment). That's what we mean by "changing the game for website development". It's the best of both worlds.

In light of that, we thought it would be fun to take a little retrospective on the history of this industry. It's humbling and surprising to me to see how much has happened in such a short time, and to remember that this is still only the beginning. Hope you enjoy it! 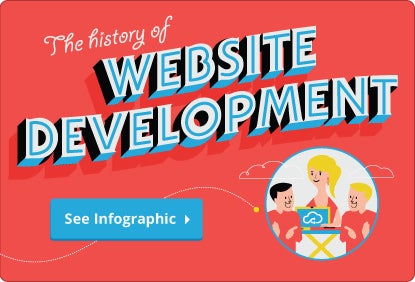