We had a pretty good turnout here at Pantheon HQ for a Headless Drupal themed SF Drupal User’s Group:

The excitement is clear. So what's next?

Put Your Code Where Your Mouth Is

In any place where there's much excitement, there also tends to be a lot of discussion about what could or should be done. My suggestion is that we focus on creating real-world implementations with various JS frameworks and other API consuming clients.

To that end, I'm putting my code where my mouth is. Here's a working demo site: 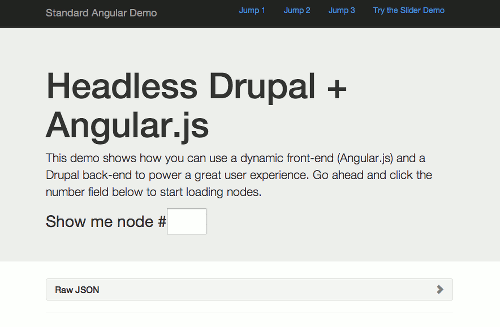 I've placed the rough demo code online at GitHub, so you can set up your own. Feel free to experiment with different implementations, or help out with the listed TODOs. Pull requests are welcome!

My ultimate vision is that we have a commonly accepted goal for demonstration implementations, and we find people who want to work on them for a number of popular JS MVC frameworks. It would also be interesting to have people do straight API implementations in raw Python or Ruby, or even just using Curl.

The end result would be something similar to TodoMVC, which helps people evaluate and embrace different JS frameworks. Having a repository of implementations would definitely speed up the process of attracting front-end developers to think about Drupal as a back-end for future projects.

At the same time, by focusing on practical/working implementations, we can much more effectively provide input and guidance to the continued core (and contrib) development. There's no need for Drupal engineers to build Headless in a vacuum.

Stay tuned for more updates as we see the outcomes of the community response. Based on what I've seen online and at the SF DUG meetup, I think some really exciting energy will come out of this.