The Head Of The Charles Regatta, known to Boston locals as HOCR, is the largest, two-day regatta in the world, hosting more than 11,000 athletes and attracting tens of thousands of spectators from across the globe each year. The HOCR website exists to build awareness around the event, chronicle the history of the 54-year tradition, and provide information for participants, spectators, sponsors, and volunteers.

On regatta weekend, the site needs to withstand half a million or more pageviews in less than four days, without crashing or compromising the user experience. HOCR called on Connelly Partners, an independent, full-service agency located in Boston, Massachusetts to help re-envision and migrate their WordPress site to Pantheon, and race day this year saw nothing but smooth sailing.

Pantheon does a great job of making WordPress enterprise-grade. It’s not a blog; it’s an enterprise content platform. 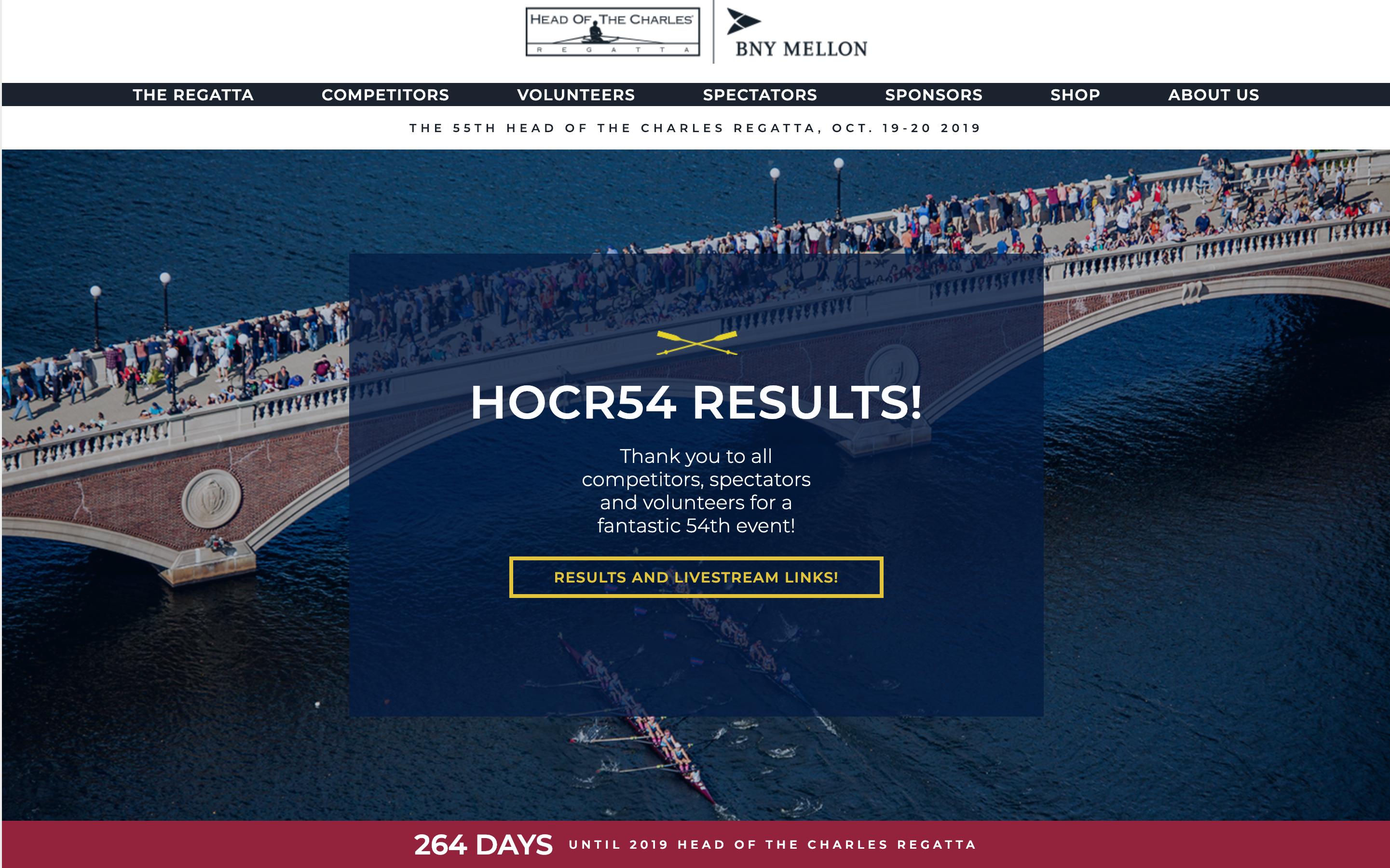 Before Pantheon: Bad Timing for Downtime

Prior to partnering with Pantheon, Head Of The Charles Regatta hosted its website on AWS, an entirely automated system. As traffic to the site skyrocketed during race weekend in 2017, the HOCR struggled to keep pace, suffering outages along the way. Because the system didn’t have automated backups, restoring the site took longer than it might—all during the most busy time of the year.

That’s when HOCR and Connelly Partners knew it was time to upgrade. Connelly Partners had 15-20 other successful Pantheon launches under their belts, so it felt like a no-brainer to pitch the platform to Head Of The Charles Regatta.

“Pantheon is the gold standard to which other PaaSs are judged,” says Scott Savitt, Senior Partner, Director of Digital at Connelly Partners. “There’s monitoring and support staff that comes with Pantheon, and that made the sell really easy. We ask ourselves: Who’s thinking of developers first? Who’s making developers’ lives easier? Those are the partners we’re looking for. Pantheon is about building a great, solid website operations platform. That’s something I’ve always been appreciative of.”

Colleague Eric Webster, Director of Technology at Connelly Partners, adds, “Pantheon is a very turnkey solution. Because of its all-encompassing nature, there’s only one bill to pay. The fact that everything is packaged together made it easy to sell.”

Connelly Partners takes pride in empowering its clients to take control of their technology and marketing stacks, another factor that led them to Pantheon. “Part of our passion, part of our DNA, is empowering clients to take control and understand the things they’re signing up for,” says Savitt. “Head of the Charles Regatta has direct access to and contact with Pantheon now. We wanted to set them up properly so that they’re in control.”

Migrating to Pantheon: Making Sure the Coast Is Clear

Within two months after the 2017 race, Connelly Partners began migrating the HOCR website onto Pantheon. Once the existing site was back on its feet, they embarked on a redesign and replatform of the new site. “This site had to act and behave like a mobile app,” says Savitt. “It’s responsively designed, and it updates real-time race data all day long. People are continually visiting the site to find that day—that’s one of the key interactions of the site.”

Connelly Partners fully redesigned the HOCR website, using ACF (Advanced Custom Fields) in WordPress to build a modular design with dynamic fields to improve user experience. “The client gets to decide what their pages look like in a very dynamic way,” says Webster.

The goal was to launch the new Head Of The Charles Regatta site before race weekend 2018, to allow for ample time to promote the two-day event. Connelly Partners successfully launched the site early, giving them plenty of time to promote the site for race day and test all possible high-traffic scenarios.

Leading up to race weekend 2018, the team at Connelly Partners simulated twice the amount of expected traffic to the new HOCR site in preparation for the big event. “We really put the Pantheon platform through its paces to ensure that on race day, there would be no hiccups,” says Webster. “We used all the Pantheon tools to ensure that we had a successful race day.”

During the weekend-long event, the Connelly Partners team woke up early to monitor the website. They relied on New Relic to monitor traffic and alert them of updates every five minutes, Terminus to clear caches as necessary, and BlazeMeter to test on off hours.

“Pantheon is leading the market in ease of integration and ease of use,” says Webster. “Whether clearing caches through Terminus, or moving a test site over to production—all that stuff takes minutes, not hours, on the Pantheon platform.” He adds, “This year was very different. Things worked the way they were supposed to.”

Thanks to a more streamlined approach and the dedication of the Connelly Partners team, nearly half a million users visited the HOCR site throughout race weekend. The site stayed up, responsive and fast—even under the heaviest loads.

The Future on Pantheon: Upgrading the HOCR Online Experience

Connelly Partners helped modernize the online experience for the Head Of The Charles Regatta by upgrading its existing brand and design and migrating the site to Pantheon. Keeping their mantra, “defiantly human,” in mind, Connelly Partners focused on creating the best possible site experience for everyone visiting the HOCR site, whether looking for parking information, reaching out about sponsorship opportunities, or tuning in for real-time updates on the races.

“Because of how easy Pantheon is to manage, it’s a lot easier to keep sites up to date,” says Savitt. And the best part? Head Of The Charles Regatta is in the driver’s seat, which is what they were looking for. “They need partners like our agency and Pantheon, who really are true partners, and who are an extension of this great organization,” says Webster. “Pantheon is making everyone’s lives easier.” Savitt adds, “We feel like there’s no better place to go.”

Find out why over 2,500 agencies trust Pantheon for their clients: Learn more about the new Pantheon Partner Program.