With AdRoll confident in it’s work in the retargeting space, it was looking toward a broader goal: helping companies act on customer data to deliver successful marketing campaigns. As the company grew, they decided to migrate their site from an in-house solution to a system that allowed the marketing team more flexibility to make changes.

An important requirement for AdRoll’s marketing team was the new website platform let them move quickly — publish new content, manage campaigns, and optimize the site without initiating large projects with engineering. In turn, the engineering team wanted marketing to have the freedom it needed without jeopardizing the site’s security or performance. 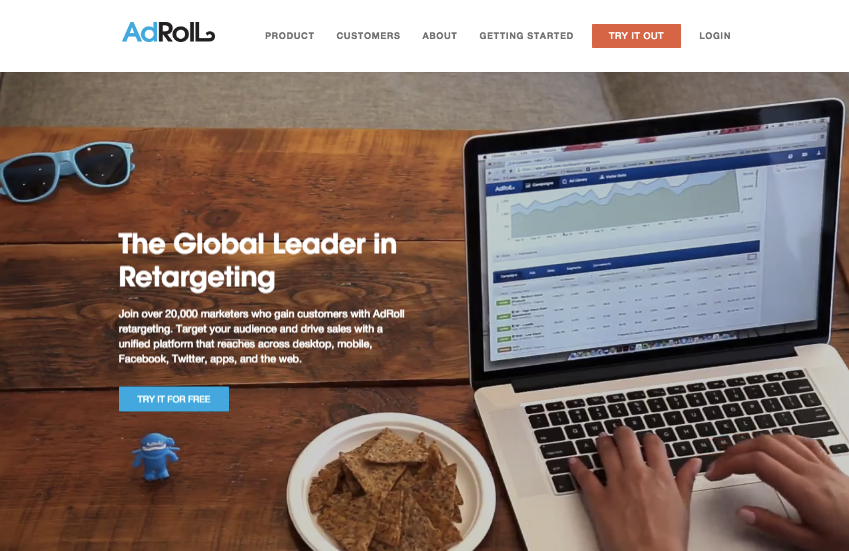 As AdRoll was debating which technology to use, marketing and IT discussed their concerns. They evaluated how well each option would enable the marketing team and how it might rate in performance, security, and total cost of ownership.

To stay flexible, agile, and leave room for growth, AdRoll chose to build a Drupal site on Pantheon’s WebOps platform. They valued being able to tap into a large community of CMS specialists and avoid the vendor lock-in that often happens when dealing with proprietary systems. By running their site on the Pantheon WebOps platform, they could have the speed and performance they needed without adding additional overhead or managing servers.

After the migration, AdRoll was able to spend more time executing marketing strategy and developing great features. The team’s newfound ability to change content quickly — by adding landing pages for new campaigns — let them unlock a greater potential for lead generation and SEO. AdRoll also saw significantly optimized performance, thanks to Pantheon’s Serverless CMS. Witnessing its scalability, the team also migrated their WordPress blog to Pantheon and benefited from Pantheon’s Website Portfolio Management tools, allowing them to manage all of their sites from a single dashboard.

Ultimately, AdRoll chose Pantheon because it gave the marketing team the independence it wanted while maintaining the highest level of performance and security. The platform’s automated security and performance monitoring lets them run a robust, secure site without using their developers’ time to implement content changes.

Because AdRoll helps clients deliver high-performance marketing campaigns, it’s important for their marketing team to adhere to the same best practices. However, before moving to Pantheon, creating new web content involved opening a ticket with engineering to push requested changes. They needed a way to update copy or build new campaign pages independently. With engineering focused on developing new features for customers and releasing fixes and updates, marketing was often faced with a one-week turnaround time or more — a far cry from the standards a growing industry leader is held to when it comes to content.

AdRoll’s IT team wanted marketing to be able to make changes more easily, but they worried that the security and stability of their website would be compromised. The engineering team wouldn’t allow other teams to update the product, which was too closely tied to the marketing site — to avoid a ripple effect from problematic code changes by less technical team members. Engineering needed assurance that marketing-related site updates would not lead to unpleasant surprises in production.

Migration and Launch on Pantheon

As they prepared to migrate their site to Pantheon, AdRoll looked to their dedicated onboarding team at Pantheon to help them pull off a successful launch. The launch team took them through a 30-day launch plan, running checks on speed and performance and load testing before going live. By the time launch day arrived, AdRoll’s site was optimized and ready to go, with the entire team trained on how to use Pantheon’s WebOps platform and developer tools. Staton describes the migration:

Without Pantheon, the migration process for our site would have taken two to three times longer with the previous engineering-driven systems and processes. I couldn’t imagine doing another site migration of this scale without Pantheon.

While the engineering team was cranking out new features and improving the product, AdRoll’s developers enjoyed the smoother workflow on Pantheon. Identical Dev-Test-Live environments allow them to employ best practices around continuous integration and ensure code pushes don’t cause problems in production.

They especially liked the transparency and clean user interface (UI), ”The developer dashboard is really useful to the team. We can see what’s ready to push, QA things easily, and see who pushed what and when,” says Staton.

The marketing team’s lives are easier, too. Since migrating to Pantheon, they no longer have to wait for engineering to push code for basic content changes. Content gets updated more quickly and improves potential for lead generation through marketing campaigns and resources.

Since choosing Pantheon, the marketing web team no longer has to wait for code pushes or configuration on the engineering side. Pantheon took all of the complexity out of the equation for us.

Since moving to the platform, AdRoll launched a new version of its main site. They’ve also rolled over their WordPress blog to Pantheon. Now the company is able to provide a user-friendly, flexible site while maintaining its high standards for security and performance. Collaboration on content is streamlined, and marketing can iterate on creative, lead-generating programs.

Thinking back to before the migration, Staton comments on the difference from then to now: “Sometimes, I wonder how we functioned before this. Now, both marketing and engineering have the freedom to move quickly on implementing new ideas — it’s a big change for the better.”

Pantheon Super-Charges Tableau’s Marketing Stack
Why WordPress? Six Reasons Why WordPress Is Ready for the Enterprise
The Perfect Website Launch—A guide for your next website project, from planning to deployment.