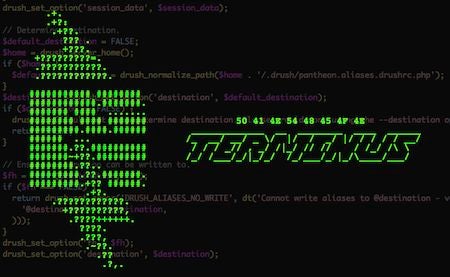 I’m happy to announce the release of a supported Command Line Interface (CLI) for the Pantheon platform. It’s free, open-source, built on Drush, and available on GitHub:

In a nutshell, Terminus allows you to do anything you can in the Pantheon dashboard from a terminal:

Full command documentation is available in the helpdesk.

Since Terminus is a command-tool that means it’s scriptable, opening the door for all kinds of DevOps workflows, including deeper integration with other projects aimed to ease the lives of developers, such as the Proviso initiative, or plug-and-play environments like Kalabox.

You can get started with Terminus quite easily, and it only takes a minute to see the value:

One of our goals in building Pantheon was to free web developers from the role of “accidental sysadmin”. By eliminating the need to even think about servers, we’ve eliminated a major source of organizational friction and saved countless thousands of person-hours doing digital janitorial (and sometimes firefighting) work.

With that said, the command line is a critical tool in many developers’ toolbelts. You can take mine when you pry it from my cold dead hands. While web interfaces are good, and can help put the power of Pantheon in the hands of a wide audience, truly brilliant developer workflows all start on the command line.

I believe that as we mature and expand this toolset, we’ll not only be saving time and frustration with people who are tired of “clicking around” to get things done, we’ll be opening the door to innovation from the wider developer community outside the Pantheon office. I can’t wait to see what people build on top of Terminus.

Part of why I’m so excited is that it’s already happening. When we thought about how we wanted to build this interface, Free and Open was the only way. It wouldn’t make a lick of sense to try and keep the operation of this toolkit locked up or proprietary, so we’ve released it under the MIT license.

As a result, we’ve already had valuable contributions from avid Pantheon developers in our initial Beta period. In particular I want to thank Mike Milano and Ben Bunk for their pull requests, and Patrick Connolly, the Kalabots, and the other Proviso provocateurs for their ideas, input and encouragement.

It’s still early days for Terminus. This initial release is going to see frequent updates as we complete Dashboard API coverage, improve the import/migration workflow, implement large-scale operations, etc. Now is a great time to tell us about your dream workflows and practical use-cases for Pantheon, so we can start architecting for them.