This year, DrupalCon went virtual. The Pantheon developer relations team was there, and they each shared their impressions from the event. 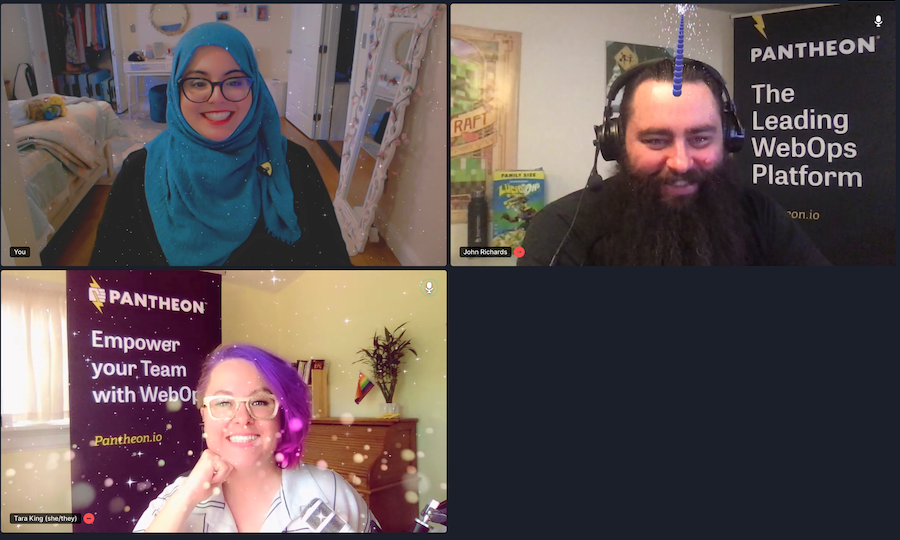 If we’re being honest, 2020 is a year of (mostly unpleasant) surprises. When DrupalCon Minneapolis was canceled, and DrupalCon Global sprung up its place, many long-time Drupalists had no idea what to expect.

Fortunately, DrupalCon Global is on the (short) list of happy surprises in 2020!  I asked the Pantheon developer relations team to reflect on DrupalCon Global: Lessons we learned, exciting new directions for Drupal, and more.

Our contributors to this piece are (in alphabetical order):

The Hallway Track Lives On... Kind of

"I’m a card-carrying introvert, so it took me a while to work up my courage to hit the networking tab… but it was pretty fun! An unusual way to meet someone new, and there’s a timer on it, so the agony only lasts five minutes." — Tara

"I’ve been attending DrupalCon since 2008. My involvement with the community (online and in-person) has profoundly changed my life and career. Every year around DrupalCon, I get excited for the chance to re-engage with the community. This year, for a whole variety of reasons, I wasn’t feeling that excitement. I didn’t know what to expect from a virtual event, but I was pretty sure it wouldn’t be like DrupalCon. I was wrong. I had opportunities to bump into people, have serendipitous conversations, learn from others, and more. I even got a little bit of DrupalCon exhaustion from the combination of starting early and staying up late." — Drew

"The hallway track is my favorite part of DrupalCon! It’s where I run into friends, check in on what they’re working on, get introduced to new people, and connect with the community. After rehearsals on the platform, I was really excited to see that we’d be able to engage with the community—in booths, with speakers at sessions, and in the networking tab. Admittedly, I only tried networking a few times—so intimidating! It was so fulfilling to be able to talk to Drupal friends in real-time, make new friends, and feel that DrupalCon exhaustion!" — Fatima

Fun Is Fundamental (Even When It’s Virtual)

"Drupal/Pantheon-themed games for the win! One of the games we played had people type humorous answers to questions, including 'I clicked the networking button and to my surprise, I met _____.' There was a huge laugh when the answers came back as Dries (founder of Drupal) and Matt Mullenweg (founder of WordPress)." — Drew 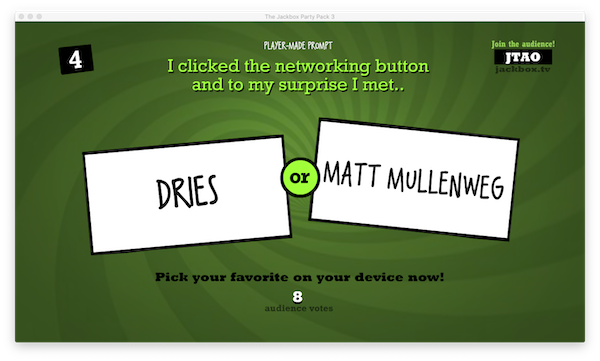 Caption: One of the many games at DrupalCon Global

"As a first-time DrupalCon attendee I was pleasantly surprised by how welcoming and friendly everyone was. There was so much history, with people who had deep roots in the community going back many years. Even then, I found that everyone was approachable; there were no 'elites.' — John

"I wasn’t really sure how it would take place, but running a virtual trivia night with one of our heroes, Brian Thompson, was so much fun! We interacted with the audience via chat and it was definitely a frenzy—watching, listening to the questions, making sure to discuss it with your team over a separate Zoom, and also submit your answers in time—but it was a fun frenzy! We received a lot of really positive feedback, and were able to run trivia every day to accommodate different time zones, which was amazing." — Fatima

"I loved seeing people create digital swag on Animal Crossing, and I don’t even _play_ that game! The community responded so creatively to the challenge of being apart." —Tara

"Yes! I really enjoyed designing Pantheon gear and visiting some Drupal agency friends on Animal Crossing, it was so kind of Jill from Ten7 to host us. We took some really silly photos in our DrupalCon t-shirts together and enjoyed their island. We went swimming, visited the pyramids, studied some dinosaur fossils, and even went shopping for new hats." — Fatima

"Nikki Stevens’ talk, Trans Drupal: Designing with Transgender Users in Mind, was a thoughtful and nuanced approach to the problems associated with asking for personal gender information and how we could do better."— Tara

"My favorite non-Pantheor session was Tim Broeker’s JavaScript Is Coming to Eat You session. I thought it was informative, well-paced, and I appreciated his take on how the web is changing and how to think about Drupal and WordPress in light of these changes." — Drew "I really enjoyed listening to Jim Birch’s session Optimizing for Search Engines with 20/20 Vision. I’ve always found SEO really interesting but had limited knowledge. I applied some of the techniques he shared to some of my social media channels—and it worked! Super informative, and I’m excited to continue learning more." — McKenna

"As a community builder, I was really looking forward to Grace Garcia Francisco’s Community and Belonging in the time of Coronavirus and it did not disappoint. I found myself nodding my head as she spoke. The presentation reinforced a lot of the shifts in the community that our team has observed over the last few months." - Katie

"I learned a ton at the Higher Education Summit; it was like a mini-conference inside of a conference. In particular, the introduction of a marketing panel was promising as it could open the door to an all-new audience." — John

"I definitely learned a lot about managing my own energy—I scheduled lunch breaks, fully intending to step away… but the FOMO was real. What if someone came by the Pantheon booth to say hi? I was surprised by how similar it felt to an in-person event." — Tara

"This was the first digital conference that I attended where it felt like an in-person conference. I experienced wonderfully serendipitous conversations and the feeling of being dead tired after staying up too late talking tech with new friends." — John

"I liked the personality of the booth but I wish we could have had that PLUS access for our great demo. It was an either/or the way we did it—either there were Pantheors in the booth, able to talk to you, or we were gone and the video was available. It would have been great to have a space for both—maybe an additional tab so that people could self-select and then come ask us questions after the demo." — Drew 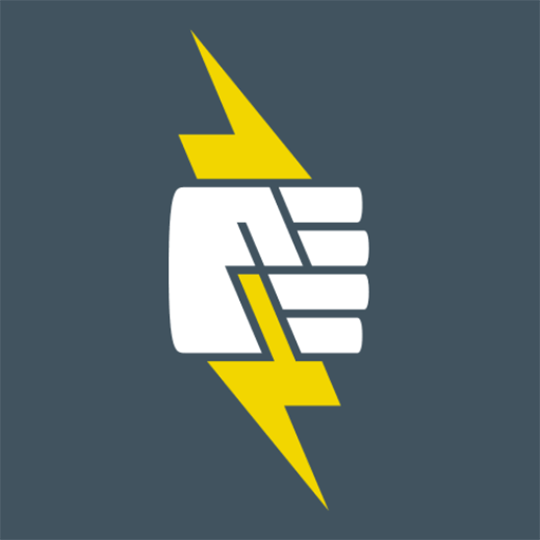