Kyriba is the global leader in next generation software-­as­-a-­service (SaaS) treasury solutions. Its Proactive Treasury Management approach helps treasury departments to better anticipate and plan for market volatility, regulation, and fraud as well as leverage opportunities for growth. Kyriba trusts Pantheon to manage its marketing site.

Founded in 2000, K​yriba ​provides SaaS treasury solutions to over 1,000 clients globally. As a leader in cloud-­based Proactive Treasury Management, Kyriba’s marketing website is not only the face of the company, but is also an important educational resource for treasury professionals, as well as an interactive platform for prospective customers. After a series of downtime incidents and realizing the need for stronger hosting backup, Kyriba’s global webmaster Lisa Mettam decided it was time to make a change. She turned to the Drupal community for recommendations and found Pantheon.

Pantheon is everything we wanted, all­-in-­one. I’m no longer spending time uploading files when I could be doing more meaningful work.

Before Pantheon, Mettam and the team were facing intermittent downtime incidents. They migrated to Pantheon for peace of mind, and haven’t had to worry about downtime or infrastructure management since. 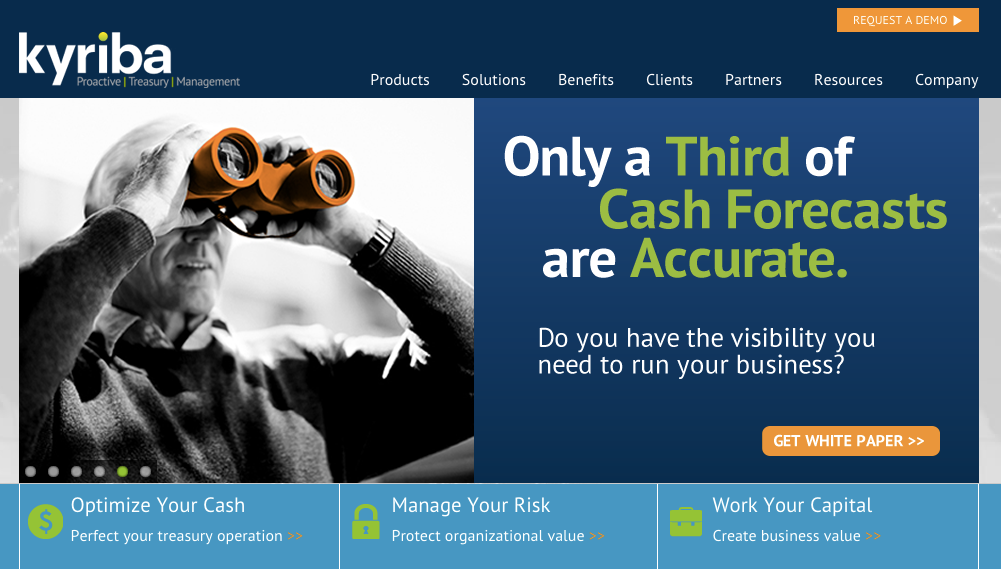 Fighting Back Against Bottlenecks

Before Pantheon, it took more effort for Mettam to update the Kyriba marketing site and it was cumbersome to stay up-to­-date on Drupal versions due to an arduous workflow. With a busy workload of front­facing tasks, it was difficult to allocate the time to keep up with non­security module updates. “Unless it was security related, it wasn’t getting updated as fast as I would have liked,” Mettam said.

As Kyriba’s in-­house Drupal expert, Mettam set out to find a single solution that could ensure uptime and an efficient workflow. She turned to the Drupal community for advice and found Pantheon—returning to her team with a list of reasons why they should migrate to the platform:

The team was impressed with the platform’s offering, and especially excited about the 99.9% uptime guarantee and ability for marketing to make updates. Kyriba decided to make the switch.

All in all, migrating the Kyriba site to Pantheon took about a month. Mettam set it up in Dev, tested to ensure all was well, and then pushed to production. “It was so simple,” she said. “I was able to recreate in Dev, follow Pantheon’s workflow, and then just switch the DNS.”

Now running on Pantheon, Mettam saves at least 2­3 hours a week not having to worry about DevOps or infrastructure. The Kyriba site has better support, improved uptime and performance, and its own IP—all while saving a significant amount of money over the previous solution.

Pantheon accomplished exactly what we wanted, and optimization efforts have made everything faster. New Relic helped identify and reduce attacks that were trying to access nonexistent files and therefore bogging down the site.

Marketing is also happy with Pantheon and the ability to check on the site’s health via the dashboard status tab. Marketing Director Ellie Ardelean can log in to Pantheon, run the check, and see how the site is doing—without having to contact IT.

“It’s incredibly simple and intuitive, and empowers the marketing team to monitor the site easily,” Ardelean said. “We’re all more efficient with Pantheon as a resource.”

Now that Ardelean, Mettam and the team aren’t up at night worrying about the site, they’ve been able to focus more on improvements and growing reach. Since migrating to Pantheon, Kyriba has added sites in Japanese, Italian, Spanish, Dutch, and soon Arabic and Chinese.

“We couldn’t have done this as easily on our old setup,” Mettam said. “Pantheon affords us the time and energy to focus on growing the company.”