For PHP projects that produce an executable application, the Phar format is a very convenient way to bundle everything in the project together into a single easy-to-use binary file. This file can even be attached to GitHub releases, where they may be downloaded with a single click. If you want to jump right in and create a new project that automatically uploads a Phar to GitHub on every release, the g1a/starter project will set that and a whole lot more up for you in just a few minutes. This blog post explains how the Phar upload process works. 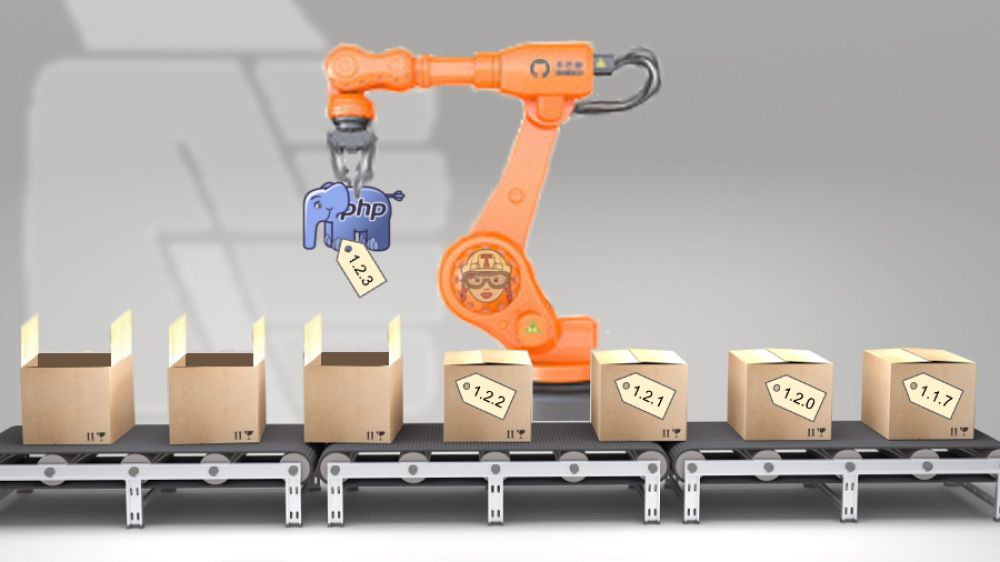 The following topics will be covered:

Feel free to skip ahead a few sections if you have already accomplished some of these steps.

The easiest way to do this is to use Robo as a Framework. Robo is a PHP task runner, but it also contains classes to make it quick and easy to build standalone applications of any type. The main entrypoint for a Robo-based application looks something like this:

The lines above perform the following functions:

That will get you the basics of a simple application that you can call from the command line. Compare this with the more full-featured example in the starter project for a hint of what else can be done with the Robo framework.

Once you have your application set up, you can define new commands with plain php code:

The annotation-based command classes are based on the symfony/console project; if you prefer, you may use symfony/console directly to create your application with only a little bit more code.

Create a Phar Version of Application

Prior to uploading the Phar, it is necessary to build it. A good way to do this is with the box command. To set it up, all that you need to do is set up a box.json file and customize its contents to specify which files from your project should be comprised from. The example below shows a partial box.json that defines the name of the output Phar and which portions of the project should be included in the final result.

Actually building the Phar can be accomplished by running box build.

Automate the Phar Build in Travis

This can be done in a before_deploy step in your .travis.yml file. Before building the Phar, it is helpful to run composer install again with the --prefer-dist and --no-dev options to remove unnecessary dev components.

Upload Phar to GitHub from Travis

Once you have a Phar, you can easily attach it to a release from the edit release page. There is a place near the bottom of the form to upload new files:

Uploading a binary file to GitHub may be easy; however, rolling out a release requires a number of different steps, all of which are easy enough to do, but tedious to do over and over again. To keep our sanity, and to reduce the chance that human error could result in a bad release, we’ll automate these steps. We will use a feature of the TravisCI command line tool to set up a release step for us. You’ll first need to download the Travis tool if you do not already have it. (Read to the end of the installation section for the platform-specific download methods; these are often easier.)

Change your working directory to a local working copy of your project and run the travis setup releases command. Answer the prompts as shown below:

Once you answer the questions that you are prompted for, the Travis tool will add release directives to your .travis.yml file. Open this file up and make the following changes to it:

Without the skip_cleanup: true directive, Travis CI would delete the build results before processing the upload. The tags: true directive causes the deploy to happen only after tag builds. The Travis setup releases command does not include these, so it is necessary to add them in after it is done.

The g1a/starter project has a simple release script that makes it easy to push out new versions of your projects. It looks similar to the following:

Pushing the new semver tag up to GitHub will cause the deploy step described above to run in TravisCI, which will result in the automation we set up above to build our Phar and upload it to the new release on GitHub.

If you define the above as a Composer script, then you will be able to make new releases simply by running composer release.

Now that you can easily make releases for your project with almost no effort, you’ll probably want to make it easy for your end users to get these updates. Rather than requiring them to visit the GitHub releases page and download the latest Phar, you could provide a self:update command to do this automatically. If you are using the Robo framework, all that you need to do is provide the full name of the project on GitHub to the runner, and the self:update command will be added for you.

Putting It All Together

If you would like some real-world examples, take a look at the following projects which use the techniques from this blog:

Decking out your application with automated releases and updates isn’t very much work when you follow the instructions in this blog. If you want to do it even faster, though, the previously mentioned g1a/starter project will do all of these steps and more. Take a look at it, try it out, and start saving time.