Mercado Ilegal is an initiative of the AMCHAM (Costa Rican - American Chamber of Commerce) with support from the Ministerio de Hacienda (Costa Rican Ministry of Finance). Developed by Manatí, this decoupled drupal web app lets the authorities crowdsource the reporting of contraband goods distribution.

Due to the ever-improving usability of Javascript UI frameworks, decoupled site building has recently gained momentum in the Drupal community. So when the Costa Rican American Chamber of Commerce approached UX designer Gabriel Golcher with a set of unique requirements that required a headless site, he turned to Manatí. CEO and Co-Founder Alberto Rojas was up to the challenge. His team trusted Pantheon to run their backend.

Using Pantheon wasn’t a question—we knew it was the best fit for the backend, and that not having to manage infrastructure would help us meet our deadline. 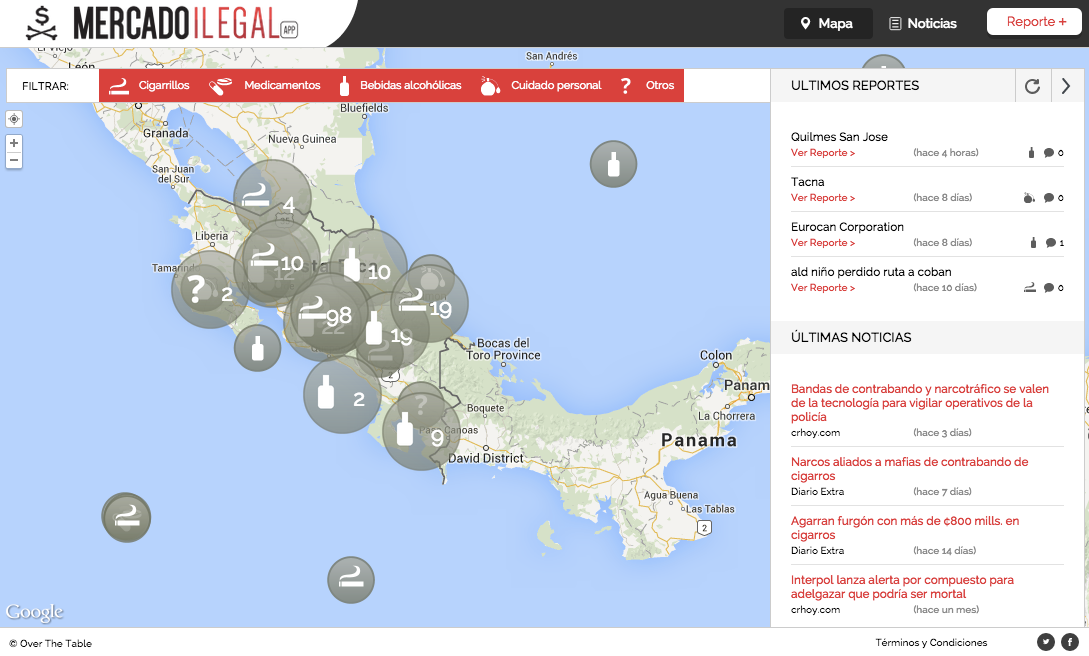 Founded in 2011, Manatí is a Costa Rican web agency that specializes in Drupal projects. Comprised of 12 team members with backgrounds ranging from design, to art, to electrical engineering, Manatí seeks to make the web a better place by focusing on political transparency. So when the Costa Rican American Chamber of Commerce needed an experienced agency to build a crowdsourced contraband reporting app, they turned to Manatí CEO and Co-founder Alberto Rojas.

“We were thrilled to learn of their project,” Rojas said. “We were to build a site that would empower citizens to share information about trafficking. We were eager to help in this movement.”

The project's UX designer, Gabriel Golcher, brought them the project—with a strict set of requirements that called for a decoupled build and an aggressive timeline of just two months. Rojas and his team were able to start with some assumptions from previous projects, but ultimately this would be their first headless project, and therefore a bit risky. The project called for an incredibly responsive, fast site integrated with maps and multiple languages, that could easily facilitate user-generated content.

“The first thing we think about with sites like these is that it’s fun to work freely on the fronted without php templates,” Rojas said. “But it is also important to keep in mind that this is a more challenging build, and AngularJS calls for extra work and custom code.”

After syncing up with the project's UX designer, the Manatí team ("Manateam") determined the architecture for the site:

Alberto and his team knew this project would come with a specific set of requirements, each with its own challenges:

“We evaluated each of these potential challenges and did our best to prepare,” Rojas said. “There were two challenges that did surprise us—the heavily modified backend and the very specific interactions.”

On the backend, the Manatí team had to create a very detailed and specific administration interface, quite different from Drupal’s normal backend. They also had to deal with multiple sites with different domains. They did this on Pantheon with a single Drupal instance, using Organic Groups to organize content, users and permissions. Drupal was configured such that when a new site is created, the administrator can assign a new custom domain for it.

Rojas’ team originally wanted to use CORS (Cross-Origin Resource Sharing) but at the time couldn’t do so, so they ended up using JSONP to overcome browser restrictions. Because Pantheon now supports CORS, they look forward to using it on future decoupled projects.

Launching Successfully with Expansion in Mind

Manatí completed the project on time—in just two months—and AMCHAM has been thrilled with the results. AMCHAM will now use the data crowdsourced in the app to provide a monthly report to government authorities. They also published a video to show the depth of the initiative.

The ability to easily create multiple new sites from the platform has allowed AMCHAM to focus on expanding the crowdsourced contraband reporting movement throughout Latin America. Currently, two sites run on the codebase: mercadoilegal.com (Costa Rica) and comercioilegal.gt (Guatemala).

“We’re happy to help citizens keep their government accountable,” Rojas said. “AMCHAM hopes to deploy in Colombia, Mexico and Argentina and add more complex features. This is a big deal for taxes. Costa Rica is processing their first batch of data and figuring out how to report the results.”

Rojas and his team have also noticed that building the site with mobile in mind resulted in incredible site speeds on both web and mobile, supported by Pantheon. Because the app itself requires a very small data download (642KB), the site is very quick to load for users. “Mobile first equals speed first,” Rojas said. “This is especially important in Latin America where broadband speeds aren’t very high.”

“Now that we have an API, the application has become agnostic,” Rojas continued. “We cannot only serve decoupled websites, but we can think of better reporting tools (created from or integrated with our API), direct communication with government platforms, data visualization from crowdsourced reports, etc. We can also start thinking about the potential of “publishing anywhere” with Drupal and a solid, state of the art infrastructure from Pantheon that supports development over infrastructure maintenance.”

A successful launch of their first headless site was not the end of the journey for Manatí. “It was a fun build,” Rojas said. “And we made sure to take note of what we learned along the way so that we can improve the next time a project like this comes along.”

Rojas noted some specific lessons learned in relation to the Mercado Ilegal project:

Should You Go Headless?

If you’re considering whether a decoupled build is the right approach for your next project, Rojas suggests doing a lot of research and choosing a good fit. “If you want a lot of flexibility, then yes, a decoupled site will give you that,” Rojas said. “A decoupled site would also work well if you need heavy frontend interaction or a publishing platform. But it is important to remember that it is a challenging project and you’ll only have the usual Drupal functionality in the backend. Your frontend is still going to have overhead if it’s complex, and performance still needs a plan on both ends.”

Pantheon Through it All

Decoupled or not, Manatí has standardized on Pantheon for all of their client projects. The platform has saved them both time and money, and the ability to develop sites for free before pushing live has also been a huge benefit.

“We’ve had client meetings where the client has a specific question and we can spin up a site in a matter of minutes on Pantheon to show them how it would work in a real way,” Rojas said. “This speeds up the project kickoff process and allows us to focus on planning the app instead of planning the infrastructure. We are saving at least 20 hours per environment setup, and monthly maintenance as well.”

Rojas also likes that he and his team don’t have to worry about DDoS or performance on the server level. “We have not yet had the need to call support for any performance-related reasons, other than to clarify what we need on our end in code,” Rojas said.

Perhaps the most important benefit is the knowledge that they can easily scale as use of the app expands. “We can ramp up with just a few clicks when the time comes,” Rojas said. “And the flexibility of billing lets us easily manage this with the client.”

Manatí presented a session on this project at DrupalCon LA—watch the video.

Sign up for the Weekly Demo
Decoupled CMS: Why “Going Headless” Is Becoming So Popular
Patch.com: A New Media Model Calls for New Media Technology