Dedicated to honoring country music’s rich history and dynamic present, the Grand Ole Opry showcases a mix of country legends and the contemporary chart-toppers who have followed in their footsteps. An icon famous for creating one-of-a-kind entertainment experiences, the Opry needed to create an equally impressive experience for their website users.

When country music legend and Grand Ole Opry member George Jones passed away in the spring of 2013, the Opry broke the news. They arranged to honor the “White Lightning” singer by live streaming his funeral at the Opry House—but before the tributes could begin, the Opry.com site went down. In that moment, digital manager Laura Pearse decided it was time for the age-old stage to find a modern hosting solution. She turned to Pantheon for scalability and reliability.

It is so comforting to run our website on Pantheon. I know we’re covered no matter what might happen tomorrow. 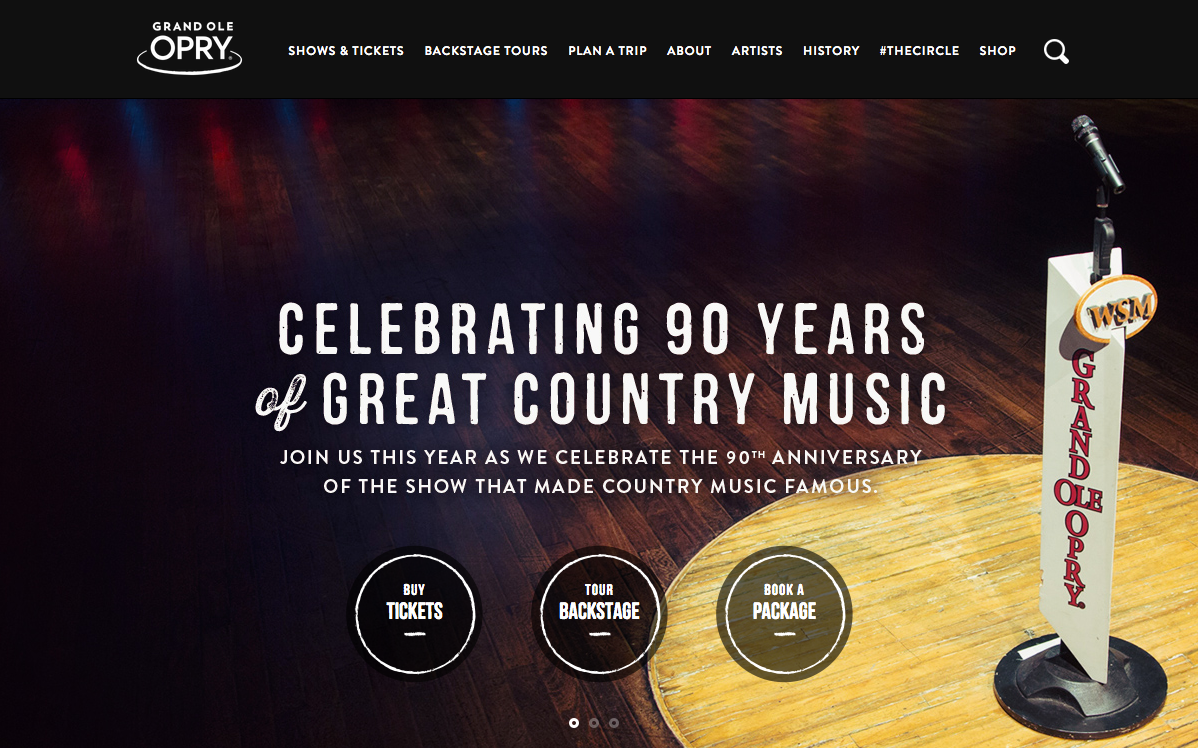 In addition to serving over 2.5 million pageviews every month, the Opry livestreams the WSM radio station all day, every day.

Opry.com is also the only place to find the Opry’s calendar, tickets, and show lineups. And without an audience, you can’t get artists—so uptime is incredibly important for Laura and her team.

“We’re a beloved, historic brand with a global reach and 90 years of rich history,” Pearse said. “It’s incredibly important that we take good care of our heritage and maintain a reliable online presence that reflects the stage and music itself.”

No Keys to The Kingdom

The Opry’s previous framework was archaic—Laura and her team didn’t know much about it, much less how to make updates. This old system caused two critical issues for them: they didn’t have direct access to servers and couldn’t scale up.

“We just dealt with things for a while, making it work—and for a long time it did work really well,” Pearse said. “Then at an absolutely crucial time, the system failed and we knew we had to make a change. I couldn’t have been happier to be tasked with finding a new solution for such an iconic brand as the Opry.”

After George Jones' death, the Opry decided to host and livestream his celebration of life service online to include his millions of fans who couldn't make the journey to Nashville. The event would include tributes and acoustic performances from fellow country music artists, Grand Ole Opry members, and industry influencers. The online live stream was intended to be an Opry.com exclusive, but the site crashed due to high traffic volume before it even began. The Opry ended up sharing the stream with local news, radio, and industry partners—eventually regaining a live site by splitting traffic elsewhere.

A Modernizing Genre Lends Itself to Modern Tech

At this point, the Opry marketing team was already re-thinking their presence in the digital space, and modernizing alongside the genre was top of mind. Pearse was tasked with finding a reliable website management solution that could scale for whatever traffic may come.

“I knew of Pantheon already,” Pearse said. “I was paying attention to the innovative things they were doing in the space and was eager to try it, but a move and recommendation like this had to back itself up with research.”

Pearse needed a solid grasp on the various options in order to present her pick to the team. She wanted to be sure her choice would live up to the team’s expectations. They needed a platform that would enable them to launch and spin up sites quickly, under extreme deadlines and promoting developer collaboration, but most importantly they needed scalability and reliability.

When it came down to it—I knew Pantheon would make me look good. And that means a whole lot in this space. They haven’t let me down since—in fact, they’re still exceeding my expectations.

Pantheon was a no-brainer for two reasons:

Development for the Opry’s new site began in November 2013, and they built it from the ground up. The first version launched in December 2013 and they’re now on version 4.2.

It’s incredibly easy to push. We launched in four major phases due to tight timelines, and continue to push new updates. We love it.

Pearse and her team could run the live site in real time while developing and enhancing in the development environment, and test servers right alongside it—all from the same dashboard. “Each version of Opry.com included major changes, features, and enhancements so it was great to be able to have this workflow,” she said. “Plus, launching live is a breeze. A few buttons, a tiny bit of testing post-launch, and boom. We’re live. We’ve never had it so easy.”

The ability to scale up quickly if needed was a major issue now solved with Pantheon, ultimately freeing up the Opry team to focus on what they do best. “We’re now able to focus on marketing objectives, shows and events, and not worry about frameworks or hosting,” Pearse said. “We also have more tools than ever with multiple environments and an amazing dashboard. We’re much better positioned to drive sales and marketing objectives, and bring the Opry into the next era of country music in the digital space.”

On Pantheon, Pearse and her team rest easy that their site is in good hands. “We feel like we have an entire team supporting us—something we didn’t have prior to migrating to Pantheon. We built the new site directly on the platform so the onboarding process was extremely helpful and the support is world-class. We’re confident we have quick, reliable support should we ever need it, and we rarely do!”

The other largest benefit of Pantheon was the speed at which her team spun up the site. They were on an extremely tight deadline to launch a complete digital rebrand of the Grand Ole Opry, so they had a lot to focus on—from design to custom development to hosting and launching.

“Pantheon lets us focus our resources where they’re really needed,” Pearse said. “And we ended up launching an amazing first version of Opry.com, on time, thanks to Pantheon.”

Since building Opry.com on Drupal with Pantheon, the team has also migrated their WordPress site, heehaw.com, to the platform. “This was one of our early requests, and Pantheon delivered 10 fold,” Pearse said. “We now have both sites in the same dashboard, easy to get to, and they run great. We hope to have more sites follow.”

A Bright Future for Opry.com

The Opry’s 90th anniversary will occur this October with celebrations running throughout the year. Pearse and her team feel prepared for this on Pantheon. They can build their online celebrations in a lifelike environment and let executives and stakeholders review before pushing live.

The time saved has allowed us all kinds of opportunities for new features and content.

The Opry’s marketing team is also excited to have the bandwidth and resources to work on providing exclusive backstage content on the site. They’re able to launch this content quickly, interacting with fans and providing value in a whole new way.

What's the Deal With "DevOps"?
Why WordPress? Six Reasons Why WordPress Is Ready for the Enterprise
The Perfect Website Launch: A guide for your next website project, from planning to deployment.