Covenant is a tabletop gaming retailer with a pioneering game subscription model. They rely on Pantheon for security, resiliency, and a development workflow that makes it easy to grow and improve their site.

There’s something magical about playing a board game with your friends—especially if you win. Tabletop gaming is enjoying a renaissance in the 2010s, with hundreds of new games released every year.

Tabletop gaming retailer Covenant was founded with a singular vision: Make it as easy as possible for people to connect through tabletop games. In order to do this, they needed a website that allowed players to effortlessly learn to play and purchase their curated selection of games.

Unfortunately, Covenant’s first attempt at building an ecommerce site didn’t live up to their expectations. Just keeping the site up and featuring the latest products was a challenge. After a critical failure took them offline for nearly two weeks, the team knew they needed a change.

Covenant partnered with North UX to build a new site using WooCommerce on Pantheon. The new site is stable, resilient, and responsive. Even better, Pantheon’s development workflow makes it easy to update the site quickly, without fear of another costly critical fail.

The turnaround between an idea and the implementation of that idea is way shorter. At every moment we are improving our site so that more people can discover this hobby and we can grow the company. Pantheon has enabled success for us on the web. 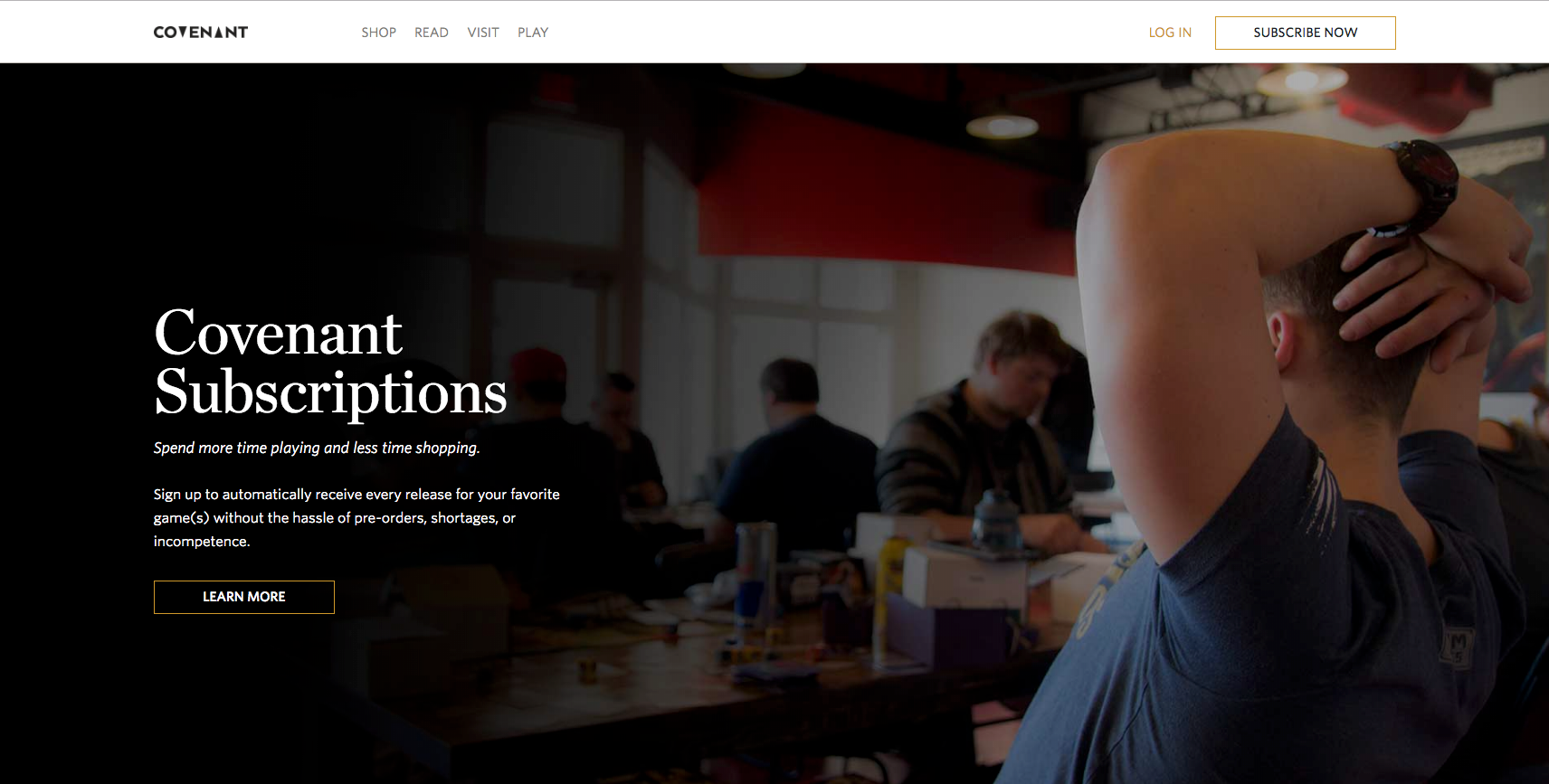 Before Pantheon: Instability and Uncertainty

Zach Bunn and Steven Wooley grew up playing tabletop games together. As they grew older, they began to explore how to turn their hobby and passion into a career. It started with Zach selling individual collectible trading cards online to finance his gaming habit. Steven joined soon after and they progressed to selling more items, creating an online store, and blogging about games.

Bunn and Wooley wanted to improve the user experience of buying and playing collectible card games and other tabletop games. With the help of new team members Robert Johnson and Jonathan Wooley, they started posting game tutorials on YouTube, launched a Magento store separate from the main site, and offered product subscriptions for their small catalog of games.

Developing with their Magento ecommerce solution was a complex and difficult process, however. “If we wanted to change anything, we just rolled the dice and hoped that nothing fatal happened,” says Steve Wooley, Marketing Director at Covenant.

In 2015, one such die-roll turned up snake eyes. Covenant’s ecommerce site suffered a critical failure and was offline for nearly two weeks. Wooley estimates that it took months to fully recover—it was nearly a company-ending event.

“We started asking, ‘How can we do web development in a professional and non-terrifying way?’” says Wooley.

The Covenant team was able to cobble together an immediate solution, but they knew they needed a more stable platform if they wanted to grow as a company. They landed on Pantheon as the best solution to fill out their list of must-haves:

The team also sought help from web development agency North UX and owner Krissie VandeNoord. In their initial conversations, VandeNoord confirmed Pantheon as a great platform. “They’re some of my favorite people to work with and are very developer-friendly,” says VandeNoord.

“She told us, ‘Pantheon is ideal for companies who intend to constantly improve their website,’” says Wooley. “I got the impression that if you want to do this right, you get Pantheon as your host, period.”

WooCommerce on Pantheon: The Perfect Match

VandeNoord recommended building the new site with WooCommerce, which could provide the seamless user experience Covenant wanted. According to VandeNoord, Pantheon’s Multidev environment and development workflow was ideal for the CMS.

“A WooCommerce site is continually accepting data; orders can be processed at any time. If you pull a database down and push it back up, you’re going to lose orders in the process. With Multidev set up, you don’t have to take the site offline to make changes,” says VandeNoord.

When the team encountered a few unexpected issues with the rollout, support was easy to find. “We just get on chat and have candid, tech-talk conversations and work out a solution. They’re super helpful. We have not found that with other hosts,” says VandeNoord.

For Wooley, one major benefit is Pantheon’s dedication to security. “Security is definitely a priority for Pantheon,” he says. “It’s nice to know we’re running with a system that cares about the security of our site. It’s nice to offer that to our customers.”

Running on Pantheon: From Ideas to Implementation

With Pantheon’s developer tools and workflow, North UX and Covenant find it quick and easy to test and implement new ideas.

“It feels like the web presence we have now is a living, moving, constantly changing thing,” says Wooley. “We can react to anything that might benefit our business. Turnaround between idea and implementation of that idea is way shorter on Pantheon.”

The team at Covenant has gone from a static, hard-to-update, unreliable site to a robust and resilient web presence. Next up: Clearing out the last of their legacy code and relaunching a fresh site on Pantheon. “We’re building it out from scratch exactly how we want it,” says Wooley. “There’s no shortage of things we can do to make customers even happier when interacting with us on the web.”

Have questions about WooCommerce on Pantheon? Check out our Developer Office Hours.