This past weekend I spent three days at WordCamp Miami. When I told folks I'd been in Drupal for over a decade, several asked "Well, what do you think about WordPress?" It's an intriguing comparison, Drupal and WordPress: two successful, parallel ecosystems and developer communities. Here are my (initial) thoughts. 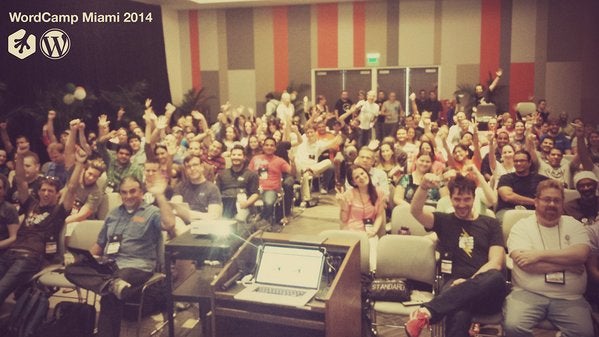 Pantheon added official WordPress support in March, and since then I've talked with a lot of developers, but this is my first direct experience with WordPress as a community. For those of you who don't know, I go waaaaaay back in Drupal, and am a believer in its destiny. I've been around open-source and the web for even longer, and used WordPress myself (actually "bb") back in 2002 - 2004. Still, I'd never attended a WP event before.

I'm happy to say it's an exciting, energetic, and boisterous group; very good vibes. In some ways it reminds me of the feel in Drupal five or six years ago, a period when the community was growing quickly, and also doing a lot of growing up. There were moments that felt a lot like those heady early days; in other ways it was totally different.

First of all, it is clearly not "early days." WordPress 1.0 was announced in January 2004, and is now the most widely installed website technology on the internet. But it does feel like a community in transition, growing beyond a "personal publishing" platform. Not having the history here I can't say for sure, but it feels like there's a wave of professionalization underway.

The project's roots as a user-first technology are clear. Aesthetics are a core value — "code is poetry" they say — and it shows. From the quality of presentations, to booth presence, to the websites people are demoing for each-other, there's an impressive level of polish.

And there's some pride to go along with it. WordPress powers around 20% of the web, and the community knows it. While hubris is always something to watch out for, the swagger that's there is well deserved. I don't get the sense that all this success has gone to heads. Good to see.

There's definitely a contrast in the technical expertise of the average attendee vs what I get at Drupal events. I'm used to pretty heady conversations being the norm at camp. Not so much here. WordCamps draw a lot of people who were putting up their first website. They even had a workshop for kids!

The WP community is focused on the user. It's one of the ways they make decisions. While Drupal developers tend to value technical excellence and architectural flexibility — "what can I do with this as a developer?" WordPress people seem to ask the same question with the content editor or website visitor in mind. That's refreshing.

While there's a bounty of better user experiences (nice!), I get the sense that WordPress will need to attract/develop more seasoned engineering talent to cope with a growing demand for complex and high-end sites. Check out how bad-ass this recruiting page isfrom one of the bigger shops around.

So, they're working on it. Also, as befits a healthy community, there's a strong dedication totraining, sharing, and leveling up together, so I don't doubt WordPress will get there.

I don't get the sense that there are as quite many big "WordPress shops" at the moment as there are in the Drupal space. The sponsors running tables were us, a nifty local development tool called ServerPress, and a bunch of hosting companies. By contrast, at DrupalCon events, shops tend to dominate the top sponsor slots and tables.

Some of that has to do with WordCamp community guidelines around commercial presence at camps, but I think it also reflects Drupal's position as a go-to tool for complex/bigger, "enterprise" sites. Those projects require a higher degree of commercial acumen, and their budgets can underwrite the associated expenses. It feels like right now Drupal's a bit ahead in terms of Professional Services maturity.

That said, they had a whole day focused around business, drawing a lot of attendees. Sessions ran from how to better operate as a professional website developer, to building a revenue stream around a plugin, to using WordPress to build your own business as a user. With growing demand, and evident interest, I expect the ecosystem of WordPress professionals to mature and expand in the years to come.

There are also a lot of people in the WordPress space actively building product businesses. Paid plugins, premium themes, even fully-fledged SaaS solutions based on WordPress. This is very different from Drupal, where pay-to-play functionality is mostly frowned upon, and "Drupal products" are mostly for lead-generation. It's exciting to see so many people focused on applications and solutions.

There were a few WordPress myths that I was happy to see busted in my few days in Miami.

The myth that WP is an amateur tool built on iffy technology evaporated immediately just by looking at a few things people were demoing to one-another on laptops. Expert developers are a minority in a crowd of end-users, but the things they're doing with WordPress as a framework are 100% legit.

That's far from an exhaustive list. For instance, while he wasn't in Miami, but in this vein I'd be remiss not to mention Daniel Bachuber, the lead developer on WP-CLI. A solid command-line is a major boon. Cal profiled him last week.

Similarly, while WP core has fewer features compared to Drupal Core, and faces some constraints because of its commitment to backward compatibility, there's real innovation going on there. In particular, they are moving things ahead by keeping up with the latest and greatest in JavaScript development — modern jQuery, backbone.js, etc. — a common pain point in Drupal.

While Drupalists can proudly (and rightly) point to core features like Form API, Fields API, Menu API, and robust contrib modules like Views as technical value-adds, the notion that WordPress is "just a blog" definitely feels behind the times.

There are a few things I'll be tracking in particular — maybe even contributing to! — as I spend more time in this community.

One of the things I think WordPress could benefit from going forward is stronger and better documented best practices for developers. With more people doing custom development to meet a broader range of use-cases, the question of "doing it right" becomes paramount.

Most of the negative reputation floating around about scalability and security have to do either with low-grade infrastructure, or kludgy custom development. These things aren't really WordPress's fault per se, but they could be doing more to mitigate these problems by promoting good examples to follow.

There are a lot of people who want to solve all the problems of WordPress with WordPress. While an inevitable part of tooling up as a framework is testing the boundaries of what you can do, I've seen this lead to some problems in the Drupal project.

You want to push the limits of your project, but you also want to use the best tools available, and to keep up with what the rest of the internet is doing. There's a concerted effort now in Drupal to "get off the island" and form more alliances with other projects. I wonder if the same will some day be necessary in WordPress.

Nobody mentioned it, but I have to imagine people are aware that Automattic has raised huge sums of money in the past couple of years, and is currently valued at over a billion dollars. Matt Mullenweg's word seems to be pretty much Gospel, and to his credit he's made quality decisions. It's hard to argue with the results, but you have to wonder if there will be conflict.

A maturing business ecosystem and a powerful central commercial entity will produce tension. We've definitely seen that play out in the Drupal world with Acquia®, who directly competes with Drupal shops. It will be very interesting to watch the dynamic over the next few years as more and larger independent business entities emerge from and enter the world of WordPress.

I hope that Matt and WordPress.com will be able to thread the needle. They're off to a good start by avoiding channel conflict a la Acquia®; but they'll definitely face more technical and entrepreneurial challenges in the future.

The first and most obvious conclusions is that it's way too soon for me to draw any firm conclusions. I'm still a n00b and I've got a lot of learning to do. I can speak with some authority about Drupal, but not so much about WP.

That said, it feels like a community on the rise. Not necessarily in numbers — it's huge already — but in the scale and variety of problems they're solving. WordPress is making progress and the community knows it. That's exciting. There's an edge there that's palpable.

I think the whole web can expect to see great things come from within and around WordPress in the near future. Exciting times!