Please welcome Kelly Bell from Gotham City Drupal. Kelly was one of Pantheon's first advocates and shares her Drupal Development experience in this blog post.

Before Pantheon, three to five days of any project involved me installing and perfecting long laundry lists of scripts and install profiles—what was essentially Pantheon v1. All these things—Git, Drush, Varnish Database optimizations, performance enhancements, phpmyadmin—had to be installed and configured and set up just right for Drupal, not to mention the hardware configurations, the right balance of physical storage with RAM, which is never right out-of-box for Drupal. And of course, most importantly, dev, test, and live environments.

Drupal can have a steep learning curve. Pantheon can help your team get over the hump in far quicker time.  It's a rocket booster over the 'suck threshold' of developing sites with Drupal: 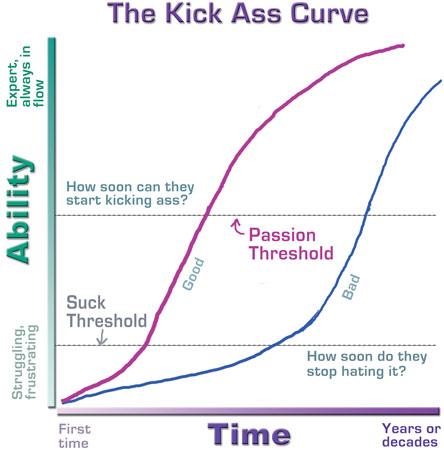 Five years ago at Gotham City Drupal, we knew the best practices for Drupal. But our clients didn’t, and they didn’t want to pay for something they couldn’t see, or often even understand. Clients feel vulnerable when a site breaks, but they don’t know how to evaluate their options. I knew they desperately needed this work, so I wound up doing it anyway. It had to be done.

I knew if I didn’t set up a stable working system that would conform to the best practices for Drupal performance, I would be the one to pay. I would pay in midnight calls for emergencies that could have been foreseen, lost code, rollbacks to God-knows-how-old backups.

Those of us who care know what the right way is, and these guys built it. They were doing exactly what I was dying for, and doing it with all their expertise instead of self-taught me, all by myself.

I switched all my clients over to Pantheon immediately. Count Me In was the first live CRM integration with Drupal. Shortly thereafter, we launched a completely-rebuilt Campaign for Liberty site. From there, we built and launched several ecommerce, non-profit and B2B sites. We recently launched Empire Paintball and JT Splatmaster, the first Panopoly + eCommerce site. We have done custom third-party integrations with CDNs, CiviCRM, Sugar, Salesforce, Shopify, ChargeLogic, proprietary in-house company inventory systems, Facebook and Twitter.

HOW WE USE PANTHEON

Every developer who works with me uses Pantheon. Pantheon is our central meeting place, allowing many developers to collaborate on a centralized system. You don’t have to worry about code warehousing all over the place, and things getting out of sync. Everyone does what they do on their local machine. Pantheon is where all the code goes.

Pantheon enforces adherence to Drupal best practices, so clients and developers no longer argue about how to do things.

If you itemize the costs for a customer to pay for systems architecture, failures, system software updates, and performance tweaks it would be tens of thousands of dollars of consulting work. This is all specialized work, and Pantheon is now doing it for them in software, without any upfront expense or time wasted that could otherwise be spent on their actual website.

My shop couldn’t exist in the form it does without Pantheon. Their services are absolutely central to my business model.

Pantheon lets us scale as a firm. I don’t have to spend all my time being a sysadmin. I can support clients and provide infinitely better customer service. We’re much more responsive in terms of building new things and addressing bugs. We’re allowed to be pure developers.

I don’t get many 4am fire drills anymore.

In the Drupal world, you sometimes see developers who have new-stuff fatigue. To them I would say, ‘Pantheon isn’t doing anything you don’t already understand.’ If you’ve been working with Drupal for any length of time, then you’re aware of the best practices. Pantheon keeps you to code. Your system is now reliable, stable, set up the right way, and not subject to anyone’s opinion.

The team behind Pantheon is the Drupal community. They’re continually building Drupal. The future of Drupal is what is happening on Pantheon. The decisions Pantheon’s team are making around Drupal are for the freedom, openness and longevity of the platform. At the end of the day, isn't that what it's all about?